UN inquiry says torture, rape and arbitrary detention among the wrongdoings documented over the past 16 months 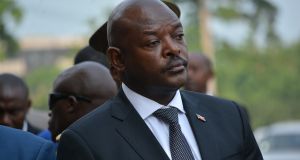 Burundians responsible for serious human rights violations continue to enjoy impunity despite the death of the previous president, according to a United Nations commission of inquiry.

Torture, rape, and arbitrary arrest and detention are among wrongdoings documented over the past 16 months, which the commission says may constitute crimes against humanity.

Corruption and the misappropriation of public funds and development assistance is also ongoing, the commission said.

Burundi’s new president Évariste Ndayishimiye came to power in June. He is a former military commander and also served as the interior minister. His government includes many officials from the previous regime, while dozens of military figures regularly accused of grave abuses have been promoted under him.

The situation was particularly bad in the year before the May 2020 election, when human rights violations were carried out with the aim of making sure the main opposition party had no chance of winning. The police, national intelligence service and the judiciary were all involved, according to the commission’s 54-page report.

Members of the commission have also updated a list of Burundians believed to be responsible for crimes against humanity.

Burundi had a political crisis in 2015 when then president Pierre Nkurunziza refused to step down after two terms. Months of protests and an attempted coup were met with targeted murders of civilians, armed rebellions, and severe repression by the security forces.

The United Nations Commission of Inquiry on Burundi was established in 2016, with a mandate to investigate what had happened.

Though he finally agreed to resign this year, Mr Nkurunziza died in June, weeks after an election which brought the new leader to power, ruling party CNDD-FDD’s candidate Mr Ndayishimiye. While authorities say the 55-year-old died of a heart attack, international observers have continued to speculate about other causes; the Guardian newspaperreported that Mr Nkurunziza is thought to have died of coronavirus.

Burundi, a landlocked country in Africa’s Great Lakes region, has a population of more than 11 million. More than 330,000 Burundians are still living as refugees in neighbouring countries.

“Efforts to re-engage and resume co-operation with Ndayishimiye and his government should be based on concrete change on the ground, which we have yet to see,” said John Fisher, Geneva director at advocacy organisation Human Rights Watch, in a statement sent to The Irish Times.

“It would be irresponsible for the international community to reduce scrutiny of the rights situation in Burundi at this critical juncture.”

In August, Burundian politicians said the country was calling for Germany and Belgium to pay ¤36 billion euroin reparations for damages caused during decades of colonial rule. Both European countries deliberately exacerbated ethnic divides, which later led to conflict breaking out and hundreds of thousands of people being killed.