Belarus bars head of its Catholic Church after criticism of crackdown 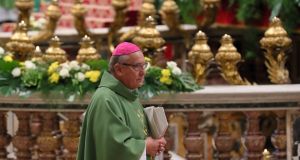 Archbishop Tadeusz Kondrusiewicz was stopped at the border with Poland on August 31st. Photograph: Grzegorz Galazka/Mondadori Portfolio via Getty Images

The Vatican has urged Belarus to allow the head of its Catholic Church to return to the country, after his passport was annulled following his criticism of a police crackdown on peaceful protests against President Alexander Lukashenko.

Archbishop Tadeusz Kondrusiewicz was stopped at the border with Poland on August 31st, as Belarus was rocked by huge rallies against Mr Lukashenko’s claim to have won a disputed presidential election, and a brutal police response in which at least three have people died, hundreds have been hurt and some 10,000 detained.

Archbishop Kondrusiewicz condemned the state violence, called for dialogue to end the crisis and criticised riot police who blocked protesters inside the Church of Saints Symon and Alena in Minsk, a landmark in the Belarusian capital that is known as the Red Church.

The Catholic authorities in mostly Orthodox Belarus were told by its border guard service this week that Archbishop Kondrusiewicz had been refused entry to the country because interior ministry agencies had ruled that his passport was not valid.

“We insist that Archbishop Kondrusiewicz be allowed to return to his seat and continue to lead his flock,” said Vatican secretary of state Cardinal Pietro Parolin, adding that the church was a “factor of reconciliation, of dialogue, of peace”.

US secretary of state Mike Pompeo has also urged Mr Lukashenko’s regime to permit the archbishop to go back to Minsk and to allow “all Belarusian people . . . to exercise their fundamental freedoms, including freedom to worship”.

Facing the biggest protest movement of his 26-year rule, Mr Lukashenko has accused Poland and Lithuania, two mostly Catholic neighbours of Belarus, of plotting to oust him and even of posing a military threat to his country.

State news agency Belta earlier this month quoted Mr Lukashenko as saying that Archbishop Kondrusiewicz had travelled “unexpectedly” to Warsaw and then tried to return to Belarus having “been given certain tasks” in the Polish capital.

“If everything’s clean and law-abiding, then we’ll act according to the law,” said the former Soviet state farm boss, who the EU says it will no longer recognise as the Belarusian president after elections that were allegedly riddled with fraud.

“It doesn’t matter to us if he’s the main Catholic, the main Orthodox [Christian] or the main Muslim. He should live by the law. And if you also got into politics and dragged along believers – Catholics, who are wonderful people – then you have twice the responsibility.”