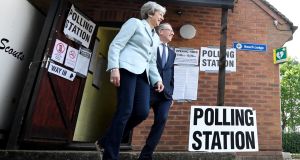 Britain’s prime minister Theresa May and her husband Philip leave a polling station in Sonning after voting in the European Parliament Elections. Photograph: Toby Melville

Theresa May is expected to announce on Friday that she will resign as leader of the Conservative Party early next month, staying on as British prime minister until her successor is chosen. Her government postponed Friday’s planned publication of the Withdrawal Agreement Bill (WAB) after ministers told her they could not support it.

Mrs May is due to meet Graham Brady, chairman of the 1922 Committee of Conservative backbenchers, on Friday morning to set out the timetable for her departure. The committee’s executive held a secret ballot this week on changing party rules to allow an immediate confidence vote in the prime minister if she refuses to leave but Sir Graham is keeping the ballots sealed until Friday’s meeting.

Foreign secretary Jeremy Hunt and home secretary Sajid Javid met Mrs May separately on Thursday to tell her they could not support the WAB in its current form. Commons leader Andrea Leadsom resigned from the cabinet on Wednesday night in protest against the Bill’s promise of a vote for MPs on whether to put Brexit to a second referendum.

The prime minister’s official spokesman said she was “listening to colleagues” and their concerns about the Bill but declined to say when, if at all, it would be put to a vote in the House of Commons.

Britain voted on Thursday in European Parliament elections with polls predicting a poor performance for both main parties. A final IpsosMori poll put Nigel Farage’s Brexit Party on top with 35 per cent, with the Liberal Democrats on 20 per cent pushing Labour into third place on 15 per cent. The poll put the Conservatives in fifth place with 9 per cent, one point behind the Greens’ 10 per cent.