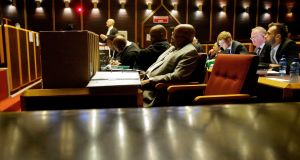 A South African court that must decide if corruption charges against former president Jacob Zuma should be dropped has heard he is using an approach to litigation known as the “Stalingrad defence” to delay his prosecution.

State prosecutor Wim Trengove told the Pietermaritzburg high court on Thursday that Mr Zuma had used a consistent pattern of litigation that was ultimately designed to delay his prosecution on corruption charges related to a multibillion-rand government arms deal.

The Stalingrad defence – named after the military tactics Russia used to defend Stalingrad from German invasion in the second World War – is a legal strategy in which the accused opposes anything the plaintiff presents and appeals every ruling favourable to them.

Mr Trengove, who is representing the National Prosecuting Authority (NPA), said the litigation involving Mr Zuma had gone on “for almost 14 years without interruption, barring one month”. During this time the former president had “lost all of those cases”, the prosecutor added.

The state advocate said Mr Zuma’s legal strategy had cost taxpayers between 16 million rand (about €1 million) and 32 million rand. Although Mr Trengove said Mr Zuma had every right to appeal rulings that went against him, he maintained it was “luxurious litigation designed to delay”.

Mr Zuma, who was forced to resign as South Africa’s president in February 2018 by the ruling African National Congress, is seeking a stay of prosecution on the 16 corruption charges he is facing.

The former president is accused of fraud, money-laundering and racketeering for bribes he allegedly took via his former business adviser Schabir Shaik from French arms company Thales, which secured lucrative contracts from the government.

In 2005 when Mr Zuma was South Africa’s deputy president, Mr Shaik was found guilty of accepting the bribes on his client’s behalf and sentenced to 15 years in jail.

On Monday Mr Zuma’s legal representative accused the NPA of being biased against his client and infringing his rights, and claimed the charges were “politically motivated” and designed to end his career.

However, Mr Trengove maintained there was no evidence presented by Mr Zuma to support his claim there was a political conspiracy against him. He said if Mr Zuma escaped prosecution he would be seen to have received special treatment because he was an “important and a powerful man”, and this would undermine the rule of law in the country.

Thales is also seeking to have the corruption charges it is facing dismissed, saying it will not get a fair trial because of the delays in the case so far.

The hearing is expected to conclude on Friday. Mr Zuma’s corruption trial has been postponed to October 15th to facilitate it.