Brexit: May’s legislation pulled fuelling speculation she is about to quit

Speculation growing that British PM is on verge of quitting 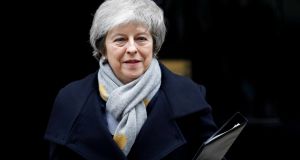 Britain’s prime minister Theresa May is on the verge of quitting, according to speculation. Photograph: Peter Nicholls/Reuters

Theresa May’s key Brexit legislation has been pulled from the Commons schedule, prompting speculation the British prime minister is on the verge of quitting.

Downing Street had insisted the second reading of the Withdrawal Agreement Bill (WAB) would go before MPs in the week beginning June 3rd, but it was not announced when the British government set out the forthcoming Commons agenda on Thursday.

On Wednesday, Downing Street had said the WAB would be published on Friday and debated by MPs in the first week of June.

But the UK’s government whip Mark Spencer, outlining forthcoming business in the Commons on Thursday, said: “We will update the House on the publication and introduction of the Withdrawal Agreement Bill on our return from the Whitsun recess.”

He later told MPs: “We do intend to publish the Withdrawal Agreement Bill the week commencing the 3rd of June.”

Mr Spencer was deputising at business questions following the resignation of Commons Leader Andrea Leadsom, who stormed out of government in protest at Mrs May’s Brexit stance.

Number 10 said Mrs May would be meeting Cabinet colleagues to discuss the Bill on Thursday, but her spokesman could not say when the legislation will be published and refused to be drawn on speculation about the PM’s future.

Mel Stride was appointed as the leader of the House of Commons, replacing Ms Leadsom.

Mr Stride, who was previously a junior minister in the finance ministry, will take on the senior role which is primarily responsible for organising government business in parliament. He will attend cabinet meetings, Mrs May’s office said.

Mrs May’s fate looks set to be sealed on Friday when she meets Sir Graham Brady, chairman of the powerful 1922 Committee of Conservative MPs.

Demands from Tory MPs for her to resign are continuing to surge following cabinet turmoil over her Brexit strategy.

Ahead of the PM’s showdown meeting with Sir Graham, 1922 Committee treasurer Sir Geoffrey Clifton-Brown said on Thursday: “I want her to give a timetable for when she will go.

“I think this blank denial from Number 10 today may be a smokescreen because she does not want to influence the outcome of the European elections.

“Maybe she will still quit tomorrow.”

Asked what would happen if the PM did not announce a resignation date, Sir Geoffrey said: “I think there will be overwhelming pressure for the 22 to change the rules and hold a ballot on confidence in the prime minister.”

British foreign secretary Jeremy Hunt, who has requested a meeting with Mrs May on Thursday but refused to say what would be discussed, insisted she would still be PM when US president Donald Trump makes a state visit to the UK from June 3rd.

Digital minister Margot James said the PM is being “hounded out of office”.

Ms James, speaking after attending an event in London, said: “It’s all very regrettable but she’s being hounded out of office because Parliament will not make a decision and the parties just have an inability to compromise.

“But in the end there’s got to be a compromise.”

Sir David Evennett is the latest Conservative to demand Mrs May’s resignation. Previously viewed as a loyalist, the Bexleyheath and Crayford MP used European Parliament election day to insist Mrs May must go.

He tweeted: “Theresa May must now resign. We need a new PM a new Cabinet and a new approach to Brexit.”

Mrs May has previously agreed to set out the timetable for the contest to replace her after a vote on her latest Brexit deal.

But that deadline appears to have been brought forward with the announcement she will meet Sir Graham the day after the EU vote in which the Tories are widely expected to be hammered by Nigel Farage’s Brexit Party.

Sir Graham told reporters: “I will be meeting with the prime minister on Friday following her campaigning in the European elections . . . and following that meeting I will be consulting with the 1922 executive.”

The 1922 Committee’s executive had been expected to consider a rule change to allow another attempt to force Mrs May out.

Following the failed bid to oust her in 2018, under existing rules Mrs May would be safe from another confidence motion until December.

Reports suggest the committee’s executive took a secret ballot on bringing a confidence vote forward, and could release the results if Mrs May fails to set a firm exit date on Friday.

The Cabinet turmoil intensified after Mrs Leadsom said she resigned with a “heavy heart”, adding she no longer believed the Government’s approach would deliver on the referendum result to leave the European Union.

The PM, writing in reply, disagreed with the ex-minister’s assessment, but said she was sorry to lose someone of Mrs Leadsom’s “passion, drive and sincerity”.

Mrs May said: “I do not agree with you that the deal which we have negotiated with the European Union means that the United Kingdom will not become a sovereign country.”