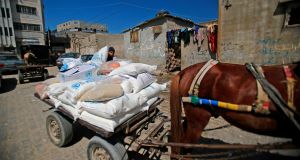 A Palestinian loads a cart with aid food provided by the UN’s World Food Programme and its agency for Palestinian refugees, Unrwa, in the Gaza Strip’s al-Shati refugee camp. Photograph: Mohammed Abed

The US has called for the dismantling of the UN agency caring for more than five million Palestinian refugees.

Trump administration envoy Jason Greenblatt told the UN Security Council that Unrwa was a “bandaid” and it was time to transfer relief services provided by the agency to host countries and humanitarian organisations. The Unrwa model has failed the Palestinian people, he said.

Last year, the White House cancelled the annual $300 million (€270 million) in funding to Unrwa, a quarter of the agency’s $1.2 billion budget, creating the most severe funding crisis in Unrwa’s history.

Addressing the council from Gaza on Thursday, Unrwa chief Pierre Krahenbuhl thanked the European Union, donor countries and institutions for making up the agency’s deficit, pointed out that Unrwa “has only enough money to run its operations until June”. He called on donors to mobilise to secure essential funding.

“At a time when Palestine refugees face a near absence of a political horizon, I am strongly convinced that preserving Unrwa’s services is a crucial contribution in terms of human dignity and regional stability,” he said.

Mr Greenblatt and US president Donald Trump’s son-in-law Jared Kushner have drafted the administration’s plan for a resolution of the 71-year-old Palestinian-Israeli conflict.

The first step in this process is a workshop to be held in Bahrain next month with the aim of reaching agreement to provide billions of dollars to provide for Palestinian development. The Palestinian leadership has condemned this approach, arguing a political settlement based on the two-state solution leading to the emergence of a Palestinian state must precede funding for development.

Unrwa was created by the UN general assembly in December 1949 because host countries, the International Committee of the Red Cross and other non-governmental organisations could not meet the basic needs of the majority of the 750,000 Palestinians driven from their homes during Israel’s war of establishment.

An additional 200,000 became refugees during the 1967 war. The agency began operations in East Jerusalem, the West Bank, Gaza, Lebanon and Syria in the spring of 1950, providing rations, shelter, healthcare, education and job training for Palestinian refugees and their descendants.

Unrwa’s mission was neither to resolve the Palestinian-Israeli conflict nor to permanently settle the refugees in host countries. Instead, it has built homes and infrastructure and given work to thousands of Palestinian administrators, teachers, medical staff, builders and labourers.

The tent camps where Palestinians began life as refugees have been transformed into urban neighbourhoods where, often, families from the same villages, towns and cities in Palestine have settled and maintained their Palestinian identity.

If Unrwa is dismantled, Palestinians remaining in the Israeli-occupied territories would have to depend on the cash-strapped and sanctioned Palestinian Authority, which administers West Bank Palestinian enclaves, and on Hamas, which rules blockaded and besieged Gaza.

War-ravaged Syria, with millions of displaced Syrians to care for, is in no position to absorb half a million Palestinians. While struggling economically, Jordan and Lebanon each have to deal with a million Syrian refugees as well as Palestinians.