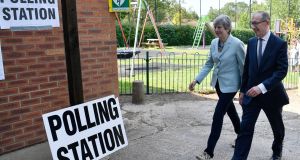 British prime minster Theresa May and husband Phillip casting their vote in the European elections in her Maidenhead constituency. Photograph: EPA/Neil Hall

Theresa May’s government has postponed the publication of the withdrawal agreement bill until next month, and failed to set a date for its second reading vote in the House of Commons. Downing Street suggested that the British prime minister was willing to rewrite parts of the bill after meetings with foreign secretary Jeremy Hunt and home secretary Sajid Javid.

Both Mr Hunt and Mr Javid told her they could not support the bill, which includes a promise to give MPs votes on a second Brexit referendum and remaining in a customs union with the EU.

The bill was due to be published on Friday, and put to a second reading vote two weeks later on Friday June 7th.

The decision to postpone the bill came as Mrs May is due to meet 1922 Committee chairman Graham Brady on Friday amid mounting pressure for her to resign. Former Conservative leader Iain Duncan Smith said the prime minister’s husband Philip should persuade her to go.

“The only person closest to her is clearly her husband, and I think somebody has to say look, nobody likes this, this is horrific what’s going on at the moment,” he told TalkRadio.

“Politics is a nasty, sometimes brutal, ghastly business. But the reality is that she has no confidence any longer, not just in her party but in the cabinet as well. So the best thing for her, and the best thing for everybody else, is to break away and say its time to find a new leader, somebody who campaigned for Brexit, who is committed to Brexit in any form.”

Even before her resignation Mrs May’s would-be successors have formed campaign teams, and have been picking up endorsements from MPs. Former defence secretary Gavin Williamson, who was sacked this month following a leak from the National Security Council, said he was backing Boris Johnson.

“I very much hope I can play a small role in making sure that his name is the one that the party chooses as leader. The bottom line is that the only person who can deliver Brexit and defeat Labour is Boris Johnson.”

Mrs May is expected to stay on as prime minister until a new Conservative leader is elected, so she will welcome US president Donald Trump to Britain early next month.

Under party rules Conservative MPs hold a series of eliminatory ballots to choose two candidates who go before the entire party membership. If Mrs May steps down as leader in the first half of June, a new leader could be in place before the end of July.

Britain voted in European Parliament elections on Thursday amid reports of citizens of other EU countries being denied the right to vote because of administrative errors.

EU citizens are entitled to vote and stand in local and European elections in any member state in which they are resident and registered to vote.