Theresa May hails agreement to deal with harassment 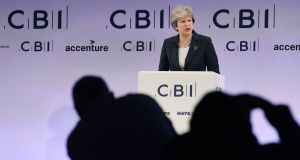 British prime minister Theresa May called for a “new culture of respect” in public life after revelations of sexual harassment. Photograph: Andy Rain/EPA

Theresa May on Monday hailed as “an important step forward” an agreement between the leaders of Britain’s main political parties on a new grievance procedure for staff, amid continuing allegations of sexual harassment at Westminster and elsewhere.

The agreement was struck after Mrs May met Jeremy Corbyn, Labour leader; Iain Blackford, Westminster leader of the Scottish National party; and other party leaders in her Westminster office to discuss proposals to protect parliamentary staff better.

The new procedure will provide face-to-face support for staff from human resources professionals and an independent grievance procedure.

The scale of the task confronting them, meanwhile, was made clear by new testimony from a Conservative party activist who said she had been raped by a man who worked for a Tory MP.

Mrs May said after the meeting that she was sorry there had been “abuses of power” over too many years.

“The fact they’ve taken place here at our seat of democracy should be a matter of shame for us all,” Mrs May said. “We’ve taken an important step forward today. It’s important that we get this right and that’s what I intend to do.”

The new plan is designed to ensure that staff, who are largely employed directly by MPs, do not have to report concerns to people who may be both their employers and their abusers.

Ahead of the meeting, Mr Corbyn had written to Mrs May saying that his party believed there should be a minimum standard of support for parliamentary staff, vetted and certified by an independent authority.

“Such an authority should offer an independent route for counselling, reporting and representation through complaints procedures, as well as powers to recommend reporting of criminal allegations to the police,” Mr Corbyn wrote.

He also urged her to recommend training for MPs following each general election in best practice employment standards and management of their parliamentary offices.

In her speech to the CBI, the employers’ organisation, on Monday, Mrs May called for a “new culture of respect” in public life after revelations of sexual harassment.

It should be possible for complaints to be brought forward without prejudice and for victims to know that their cases will be investigated properly, she added.

“Political parties have not always got this right in the past,” said Mrs May. “But I am determined to get it right for the future.”

The revelations, which last week forced the resignation of Sir Michael Fallon as defence secretary, have highlighted what many people believe is a toxic atmosphere around British politics.

The alleged rape victim told the BBC’s Victoria Derbyshire programme she blamed Westminster’s culture for the attack and that she had met senior House of Commons officials to express her concerns.

The woman did not work for an MP or at the Palace of Westminster and charges against the person she accuses of attacking her have been dropped.

The parliamentary authorities said that a conversation had taken place on August 4 between the woman and the clerk of the House of Commons.

“In the course of a 25-minute conversation, the individual concerned gave the clerk some helpful personal insights based on her view on aspects of the culture and attitudes within certain parts of the parliamentary community,” the authorities said. “These were informally reported onwards and are being acted upon in various ways.”