Visiting Asia, US president says ‘our trade with Japan is not free and it’s not reciprocal’ 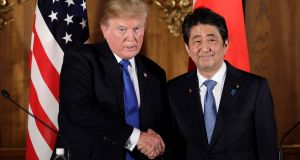 Donald Trump has used his first visit to Japan as American president to single out the chronic trade imbalance between the two countries, but said a solution is at hand – more arms sales.

“The United States has suffered massive trade deficits at the hands of Japan for many, many years,” Mr Trump said on the second day of his 12-day trek through Asia. “We have to do more.”

“We want free and reciprocal trade, but right now, our trade with Japan is not free and it’s not reciprocal, but I know that it will be,” he told a meeting of business heads, including executives from Nissan and Toyota.

Japan is the second-largest contributor to the US trade deficit after China, with a surplus last year of $68.9 billion (€60 billion). But the figures do not support Mr Trump’s accusations of predatory trade: Japan’s surplus peaked more than two decades ago.

Mr Trump has singled out cars for special attention and threatened to impose tariffs unless the deficits are reduced. “Try building your cars in the United States instead of shipping them over,” he told the meeting.

Japan says most of the cars it sells in the American market are made in North America. Toyota alone directly employs 40,000 Americans and Honda built nearly two million vehicles in North America last year.

Japanese companies have created 839,000 jobs in the United States and invested a cumulative $411 billion, according to Japanese government figures.

During a joint press conference on Monday afternoon, Mr Trump said Japanese prime minister Shinzo Abe “is going to be purchasing massive amounts of military equipment from the United States”.

“It’s a lot of jobs for us and a lot of safety for Japan,” he said, adding that missile defence technology would help shoot down North Korean missiles. Pyongyang has launched several missiles that have overflown Japanese territory this year.

Japan has a multilayered missile defence system but plans an additional layer of protection against the North Korean threat. The government is mulling the purchase of three ground-based Aegis batteries – at a cost of $700 million each.

The US-made Thaad (Terminal High Altitude Area Defence) system is also reportedly under consideration by the Japanese defence ministry, at an estimated cost of $1 billion, according to Reuters news agency.

Differences in trade were one of the few points of tension during a visit that has otherwise been marked by repeated eulogies to the Japan-US alliance and pledges of co-operation to face down North Korea.

“Our relationship is extraordinary,” said Mr Trump. “There has never been such a close relationship between the leaders of our two countries.”

Mr Abe said there was “complete agreement” on how to deal with the North’s “provocations”. “Japan consistently supports the position of President Trump when he says all options are on the table,” said the prime minister.

“There is no point in dialogue for the sake of dialogue with North Korea,” he said, adding that the two leaders were committed to applying “maximum pressure” on the regime of Kim Jong-un.

Mr Trump again refused to rule out the use of force against the North, which he called “a threat to the civilised world”, and he said “the era of strategic patience” was over – a thinly veiled criticism of his predecessor, Barack Obama.

After the summit meeting, the two men met families of Japanese people kidnapped in the 1970s and 1980s by North Korea.

Mr Trump and his wife Melania were also granted a brief audience with Emperor Akihito and his wife Empress Michiko in a meeting that was closely watched in Japan for a possible breach of imperial protocol.

The president opted for a soft handshake with the diminutive monarch rather than the bone-crusher that he has become famous for – and conspicuously avoided bowing.