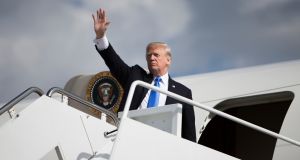 US President Donald Trump’s five-nation tour of Asia kicks off in Tokyo on Sunday, before going on to South Korea, Beijing, Vietnam and the Philippines. Photograph: Tom Brenner/The New York Times

The North Korean nuclear crisis and trade are expected to be the main topics on US president Donald Trump’s five-nation tour of Asia, which kicks off in Tokyo on Sunday, before going on to South Korea, Beijing, Vietnam and the Philippines.

“The president’s travel is going to underscore his commitment to longstanding US alliances and partnerships, and reaffirm US leadership in promoting a free and open Indo-Pacific region,” is how the White House describes the visit.

It will be the longest Asia trip by a US president since George HW Bush in late 1991, a visit best remembered for Bush vomiting into the lap of then Japanese prime minister Kiichi Miyazawa.

Since his inauguration, Trump has made 43 telephone calls to Indo-Pacific leaders, the White House said, but it’s difficult to ascertain a coherent Asia policy in the administration.

Commerce secretary Wilbur Ross’s presence on the delegation, and the 29 CEOs including Goldman Sachs’s Lloyd Blankfein, Qualcomm’s Steve Mollenkopf, Boeing’s Kevin McAllister, Shane Tedjarati of Honeywell and Andrew Liveris of DowDuPont, shows how trade will feature heavily on the agenda.

The first delegate from America’s presidential family arrived in Japan on Friday, to lukewarm reviews. Donald Trump’s daughter Ivanka told a smaller-than-expected audience in Tokyo that harassment of women “can never be tolerated”.

“All too often, our workplace culture fails to treat women with appropriate respect,” she told the World Assembly for Women.

The speech triggered unwanted memories of the harassment scandals that almost derailed her father’s campaign last year, when he was recorded boasting of “grabbing women by the pussy”.

Japanese TV showed pictures of empty chairs at the venue, the Prince Hotel.

Japan has deployed more than 21,000 police officers to protect Trump and his family, including a special female squad for Ivanka Trump – the largest-ever for a US presidential visit, according to public service broadcaster NHK.

Trump is scheduled to play a round of golf with prime minister Shinzo Abe when he arrives with his wife, Melania, on Sunday morning.

Much of their discussion is likely to involve North Korea, which has rattled Japan this year with a string of missile tests. Abe will want to avoid too much attention on Japan’s trade surplus with America, which Trump has resolved to shrink.

On Monday, the president will meet relatives of Japanese nationals kidnapped by North Korea in a bizarre plot to train language teachers and spies in the 1970s and 1980s.

The presidential couple will have an audience with Emperor Akihito and Empress Michiko on the same day. An expected highlight of their trip is being entertained by Piko Taro, whose song Pen-Pineapple-Apple-Pen became a viral hit last year. Mercifully for the famously impatient president, it is just 45 seconds long.

South Korea is a strong ally of the US, President Moon Jae-in has forged a robust relationship with Trump, and there are 28,500 American troops in the country. But this is not unconditional love, and there are complications.

Moon is under pressure at home to lead efforts to end the nuclear standoff. Lying just 60km away from the North Korean border, the capital Seoul is uniquely exposed to an assault from the North, and the sabre-rattling between North Korea’s Kim Jong-un, or “Rocket Man” in Trump parlance, and the US leader has jangled nerves.

There has been speculation that Trump might visit the demilitarised zone (DMZ) dividing the two Koreas, but that doesn’t look likely now. And there are also rumours that North Korea is planning to stage a missile test during Trump’s visit.

The South Koreans are exasperated by what they see as Trump’s mixed message, pledging solidarity in the face of North Korean aggression, but also threatening to withdraw from the Korea-US free trade agreement, or KORUS, unless it is redesigned to work more in America’s favour.

Apparently, Trump built good relations with Chinese president Xi Jinping over chocolate cake at Mar-a-Lago, and the Beijing leg will be the yardstick by which the trip will most likely be judged.

Xi is flush with the success of last week’s Communist Party congress, which gave him executive power unseen since the days of chairman Mao Zedong.

On Chinese social media, the attitude to Trump is focused largely on co-operation.

“Politics is all about exchange of the benefits, it is like business, as long as we cooperate, things that were negative will become history,” wrote a Mr Windom on the Sina Weibo website, while another commentator, Marx Ideology, wrote: “Although China and the US have different ideologies, ideology doesn’t matter that much anymore, let the US and China agree to disagree.”

Trump’s primary focus will be on encouraging the Chinese to do more to pressure North Korea to abandon its nuclear weapons programme. As recent communication between the ideological allies shows, relations are still relatively strong, although they are strained by the atomic project.

Whether Trump will go the whole way and start pressuring the Chinese to stop supplying oil to the North remains to be seen, but Beijing is very unlikely to bow to that kind of pressure.

Chen Fengying, of the China Contemporary International Affairs Institute in Shanghai, said the presence of so many entrepreneurs on the delegation shows trade is a big factor.

In Vietnam, Trump will attend the Asia-Pacific Economic Cooperation (APEC) summit in Da Nang, where Russian president Vladimir Putin will also be in attendance. There he will meet many of the countries taking part in the Trans-Pacific Partnership, a free trade pact from which he pulled the US in one of his first acts as president.

Expectations are high that Trump will stick to the diplomatic playbook during this trip, but summits are a test of his famously mercurial character, given his fondness for one-on-one “deal”-type situations, so Da Nang could be a challenging section of the trip.

In the capital, Hanoi, he will meet president Tran Dai Quang, and a major topic for discussion will be the ongoing row with China over their competing claims in the South China Sea.

In Manila, Trump will participate in meetings with the Association of Southeast Asian Nations (ASEAN). Hosting him in the Philippines is Rodrigo Duterte, who is a kindred spirit – a populist, fond of demagoguery and prepared to say anything to score political points. While Duterte called Barack Obama a “son of a whore” for criticising his drugs crackdown, which has killed an estimated 7,000 people, the Philippine leader claims Trump has expressed support for the campaign.

The Philippines is one of the US’s staunchest allies in the Asia-Pacific region, but both China and Russia have been actively wooing it of late.

Duterte has indicated to China that he is prepared to ease off on the Philippines’s rival claims in the South China Sea, once the investment keeps coming. Trump’s challenge will be to maintain the Philippines’s loyalty in the face of aggressive approaches from Beijing and Moscow.