UK Politics: Little protects the British public from a weak, or strong but wrong, government 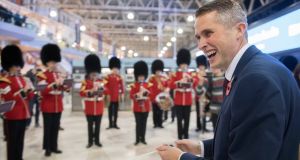 In London on Monday, a man with no ministerial experience began his first full week in charge of the world’s fifth-largest defence budget.

Gavin Williamson’s predecessor quit over stories of sexual harassment that have stained the British parliament even more than the liberties it used to take with expenses.

Across town, corporate leaders sat through the “modern industrial strategy” of Theresa May, who has spent most of her now-frail premiership blanking them and lacks the votes to do much of anything after the third consecutive general election with no commanding winner.

Despite this tour of familiar ailments – amateurism, scandal, electoral indecision – Britain is not unique in its political dysfunctions. But it is almost unique in its vulnerability to them. The ancient concentration of power in national government, and within that the executive branch, and within that the prime minister, makes for a weirdly all-or-nothing system for a country that, right down to its gentle official religion, seldom commits when it can hedge.

In Britain, an effective government can build a welfare state, as the Labour party did after 1945, or free an economy, as the Conservatives did from 1979. Poor ones, such as most of those elected in between, can maim the economy and bring the basic governability of the kingdom into doubt. Britain is exposed like almost no other nation in the rich world to the strange human variable that is politics.

When they voted for populist propositions in the same year, Britain and America became entwined in political analysis. It was useful to think of Brexit and the presidency of Donald Trump as parallel experiments with national sovereignty in the two countries that had all but evangelised for globalisation since the 1980s.

When France, Germany and the Netherlands took a different course in their own elections this year, the anglophone pair stood out even more as a distinct, coherent bloc.

The difference is that America is designed to prosper despite its politics. Even a president whose party runs the legislature must contend with the hard-wired fragmentation of power within Washington, and between Washington and the states. This institutional balance, which acts like the stop-loss on a headstrong trader’s account, is now strained as at no time since the civil war. It might yet buckle. But at least there is something there to buckle.

I used to believe that Britain, too, could succeed irrespective of its politics. I grew up in the mid-1990s, when economic and cultural life bloomed despite the agonies of government. Looking back, however, the nation’s resilience hinged on an artful prime minister, Sir John Major, and an opposition that sought more continuity than change. The human element stabilised a fraught structural situation.

The mistake is to see America, rather than Britain, as the international exception. Most mature democracies have codified balances, this set against that, to limit the reach of mere politics into the authentic life of the nation.

In recent times, Australian politics has become an extended series of I, Claudius, all intrigue and the dagger, with four prime ministers in a five-year period. In September, Australia completed its 104th consecutive quarter of economic growth – the longest expansion in modern times anywhere in the world. Canberra may as well be on the moon.

Even France, with its Jupiterian presidency, has strong mayors, extra-parliamentary actors such as the trade unions and a bureaucratic class that is trained to within an inch of its life. Wading through these force fields to change the country is, for good or bad, beyond most leaders. And what centralisation there is only goes back to 1958, when Charles de Gaulle established the Fifth Republic. Britain’s is deeper, an uninterrupted legacy of the absolute monarchs.

America’s ragged infrastructure, French resistance to change, the lack of reforms in Italy: the absence of a decisive centre comes with costs the British might not be willing to wear. But our own system errs the other way.

It trusts the life of the nation to a few offices and prays for worthy occupants. If the government is weak, or strong but wrong, little stands between us and its doings. Without EU membership, which restrains government in ways that pro-Europeans should celebrate not deny, that concentration of power intensifies.

Ostensibly dry and abstract, constitutional reform should be viewed as a practical hedge against bad government. If any good comes from the rolling fiasco of British public life, it will be a resolve to limit the nation’s exposure to its own ruling class. The country that can least afford to get its politics wrong is getting its politics wrong. – Copyright The Financial Times Limited 2017