Texas church gunman was involved in domestic with mother-in-law

Speaking in Japan, US president has denounced a mass shooting in a Texas church, in which over 20 were killed, as "an act of evil." Video: Reuters/The White House 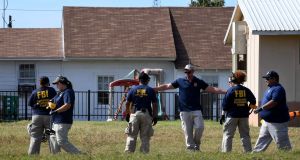 FBI agents search for clues at the entrance to the First Baptist Church after a mass shooting resulting in the deaths of 26 people in Sutherland Springs, Texas. Photograph: Mark Ralston/AFP/Getty Images

An official from the Texas Department of Public Safety has said the gunman involved in a mass shooting at a Texas church had been involved some form of domestic dispute with his mother-in-law.

The official, Freeman Martin, told reporters: “The mother-in-law attended the church. We know he sent threatening ... that she had received threatening text messages from him.”

ATF official Fred Milanowski meanwhile said three firearms were recovered after the massacre, one Ruger 556 assault rifle at the church and two handguns in the car Devin Patrick Kelley (26) used.

Mr Martin said Kelley was wearing a skull mask and ballistic vest during the massacre, in which he killed 26 people, in Sutherland Springs, Texas.

He was chased by car after the killings before shooting himself, but it is yet unclear whether he may have died from other injuries.

A man who lives nearby and heard shooting at the church had grabbed his assault rifle and opened fire on the gunman before flagging down a driver and pursuing the assailant as he fled, authorities also said.

The local man, identified by media as Stephen Willeford, was at home on Sunday when he heard gunshots coming from across the road at the First Baptist Church, Mr Martin told a news conference.

The man exchanged fire with Kelley after he left the church, having killed 26 people. The local man shot Kelley, at which point the gunman dropped his assault rifle, jumped in a Ford Expedition vehicle and fled the scene, Mr Martin said.

Mr Willeford’s cousin Ken Leonard told CNN that Mr Willeford shot Kelley three times, once in his side where there was a gap in his vest, prompting Kelley to drop his gun and force his way into an SUV, pushing a man inside it to the passenger side.

Mr Willeford then shot Kelley twice in the neck, his cousin said. “Stephen is the best shot that I know,” Mr Leonard told CNN. “He, without armor and barefooted, ran into the fire and put his own life at risk, took return fire and fired accurately three times. That’s an amazing accomplishment, especially for a man who has, who was never in the military.”

“This good Samaritan, our Texas hero, flagged down a young man from Seguin, Texas, and they jumped in their vehicle and pursued the suspect,” Mr Martin said.

“During that pursuit, he [Kelley] told his father [by phone or some other device] he had been shot and did not think he was going to make it. Subsequently he shot himself,” Mr Martin added.

While the suspect’s wife and her parents attended the church, they were not present on Sunday. The grandmother of Mr Kelley’s wife was, however. She was named as Lulu White, a regular volunteer at the church, and died in the attack.

Speaking at the scene of the attack, Republican Senator Ted Cruz of Texas said that the suspect had attended the First Baptist Church on occasion. “This depraved madman had worshiped at this church before,” he said, asking how someone “can worship God, can pray with people and then come back and murder those same people”.

Asked whether gun restrictions should be considered in the wake of the attack, he accused people of “politicising” the tragedy.

Among those who were killed in the attack were eight members of one family, spanning three generations. Bryan and Kate Holcombe, their son Marc Daniel (36) and his infant daughter died in the attack. In addition, their daughter-in-law Crystal, who was pregnant, and the wife of their other son, died along with three of her children.

Of the 20 people injured in the attack, 10 remained critically injured in hospital, authorities said.

Mr Kelley is believed to have purchased the Ruger rifle used in the shooting in a gun store in San Antonio in April last year.

It is unclear how Mr Kelley was permitted to purchase the weapon. Under US law, anyone convicted of domestic violence should not be allowed to acquire firearms.

Kelley had been discharged from the US Air Force for assaulting his spouse and child, and also had a history of animal cruelty, it also emerged.

A US Air Force spokeswoman, Ann Stefanek, said Kelley served 12 months’ confinement after a 2012 court martial for the assault on his spouse and child.

He ultimately received a bad conduct discharge and reduction in rank.

Neighbours of the gunman said they had heard gunfire in days leading up to the church atrocity, while it also emerged the killer had previously been charged with misdemeanour animal cruelty in the US state of Colorado.

Ms Stefanek said Kelley served in logistics readiness at Holloman Air Force Base in New Mexico from 2010 until his discharge in 2014.

His job was responsibility for moving passengers, cargo and personal property in military transportation.

Kelley has been identified as the person who opened fire on Sunday at the First Baptist Church of Sutherland Springs, Texas, killing 26 people and wounding about 20 others.

Kelley is reported to have lived in a San Antonio suburb and does not appear to be linked to organised terrorist groups.

The official said investigators are looking at social media posts Kelley may have made in the days before Sunday’s attack, including one that appeared to show an AR-15 style semi-automatic weapon.

An address listed in online records as belonging to Kelley is located in New Braunfels, Texas, just outside San Antonio and about 35 miles from Sutherland Springs.

At the address listed for Kelley in New Braunfels, two sheriff’s vans were parked outside and police officers stood at the gate of a cattle fence surrounding the property.

Neighbours said they had heard intense gunfire coming from the direction of the address listed for Kelley in recent days.

“It’s really loud. At first I thought someone was blasting,” said Ryan Albers (16), who lives across the road. “It had to be coming from somewhere pretty close.

“It was definitely not just a shotgun or someone hunting. It was someone using automatic weapon fire.”

A person matching Kelley’s name and date of birth also registered in 2014 to vote in Colorado, with an address listed in Colorado Springs, home of the US Air Force Academy.

The Colorado Secretary of State’s office lists his registration now as inactive.

Court records in Colorado’s El Paso County indicate Kelley was cited for animal cruelty on August 1 2014, when he lived in a mobile home park near Colorado Springs.

He was given a deferred probationary sentence and ordered to pay $368 in restitution.

The charge was dismissed in March 2016 after Kelley completed his sentence.

The Denver Post reports that court records indicate a person was granted a protection order against Kelley on January 15th, 2015, also in El Paso County.

The suspect, who is believed to have taken his own life after the church killings, was found dead in his vehicle near the border between Texas’s Wilson and Guadalupe counties.

On Sunday Sutherland Springs in Texas had become just the latest American town to join the inventory of place-names that have become synonymous with gun atrocities.

Shortly before 11.30am on Sunday, Kelley had parked his vehicle outside the First Baptist Church and began firing with a semi-automatic rifle. He moved inside the small white church where the weekly service was under way and continued shooting.

Twenty-three bodies were found inside the church and two outside, presumed killed by the gunman before he entered the church; another died in hospital.

Among those who were shot were four members of the same family, some reports said. The 14-year-old daughter of the church’s pastor, Frank Pomeroy, was killed in the carnage.

The victims ranged in age from 5 to 72. While the media awaited confirmation of the identities of the victims, in this tiny community of about 400 people the news was already seeping out. The intimacy of death was everywhere.

As darkness fell on this remote corner of rural Texas on Sunday night, a small candle-lit vigil took place across from the First Baptist church just beside the post office.

The church itself shone brightly under the full moon, its white walls and quaint porch now transformed into a murder scene.

A mile down the road, relatives and neighbours gathered at the Royal Oaks Church, the only other church in the district, which has become a makeshift community centre.

On the other side of the world, President Donald Trump condemned the “murderous attack” as a “horrible act of evil”.

“We cannot put into words the pain and grief we all feel, and we cannot begin to imagine the suffering of those who lost the ones they loved. Our hearts are broken,” he said during a visit to Tokyo.

While Republicans condemned the atrocities and offered their thoughts and prayers to the victims, it was left to Democrats to raise the question of how those deaths could have been prevented.

While former president Barack Obama, whose efforts to increase gun control in the wake of the Sandy Hook massacre were ultimately thwarted by Congress, called for “concrete steps to reduce violence and weaponry in our midst”, Texas attorney general Ken Raxton ignited controversy for suggesting that parishioners should be armed.

He argued that Texas gun laws which allow people to carry concealed weapons could have allowed the gunman to be taken out before he killed so many. The fact a local resident had seized his own gun and confronted the gunman, prompting Kelley to flee, helped bolster his case.

But while the US counted the toll of a second major mass shooting in five weeks, and the inevitable debate about gun control began again, for this small community in the heart of Texas it was too early for analysis, too soon for debate.

The words of Texas governor Rick Abbott, who joined the community in their vigil on Sunday night, were as far as many wanted to go to try to verbalise the horror of what happened: “I ask for every mom and dad at home tonight, that you put your arm around your kid and give your kid a big hug and let them know how much you love them, knowing that we support each other.” – additional reporting: agencies