Trump – one year on: In Massachusetts, people are unhealthily obsessed with the president they voted against 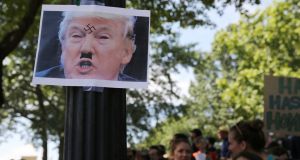 A photo of US president Trump hangs on a post at a free speech rally at Boston Common last August. Photograph: Craig F Walker/Getty Images

If Ned Flanders was human, he’d be Dave Ratner. Ratner, all eyeglasses and bushy mustache and cornball authenticity, runs a chain of stores in western Massachusetts that sell the inexplicable combination of pet supplies and soda. He has built a loyal customer base through a series of sweetly goofy TV ads and a pet show on local television with production values that make Wayne’s World look like something on Masterpiece Theatre TV series.

A few weeks ago, Ratner was invited to the White House to witness what he was told would be President Trump signing an executive order that would give small business owners like him greater flexibility in negotiating health care coverage for employees.

But in reality the executive order Trump signed will strip health care coverage from millions of poor Americans. And there was Dave Ratner, in a photograph that went viral, standing in back of Trump in the Oval Office, as Trump signed the offending order.

In the liberal enclaves of leafy western Massachusetts, where “Resist” bumper stickers are thick as the pine trees, the backlash against Ratner and his business was swift and visceral. Angry callers said they’d never buy dog food or cat litter from Dave’s Soda & Pet City again. On social media, Ratner was savaged as a greedy pig, fattening himself off his vulnerable employees.

The truth is, Dave Ratner is a decent boss and good corporate citizen.

He’s also an example of the sort of reaction Donald Trump provokes in the regions of America where he is most despised.

Here in the northeast, where voters rejected Trump by overwhelming majorities, there is an obsession with Trump that borders on the unhealthy. He dominates thought and conversation like no other president before him. He is every northeast liberal’s nightmare.

Boston is the Dublin 4 of America. Affluent, socially liberal, highly educated, secure in its opinions and property values. But it represents the rest of America about as well as Dublin 4 represents the plain people of Ireland: that is, not very well.

In huge swathes of America, Donald Trump is admired precisely because he is vulgar and willing to stick it to the political establishment, willing to call out African-American football players for kneeling during the National Anthem, willing to call anything conservatives disagree with “fake news”, willing to dismantle anything that Barack Obama touched, willing to tell the elites from Washington to the capitals of Europe and elsewhere to piss off.

Most people are appalled by Trump and wake up with trepidation... to see what the leader of the free world has said or done or, more likely, tweeted overnight

But here in Massachusetts in general and Boston in particular, his behaviour, his ignorance about governance and the world in general, his shocking lack of empathy, makes him an unavoidable daily embarrassment.

As in most of the blue states that make up the northeast, most people are appalled by Trump and wake up with trepidation, turning on their radios, televisions, iPhones or computers to see what the leader of the free world has said or done or, more likely, tweeted overnight.

Are we closer to nuclear war with North Korea?

Has he insulted another Gold Star family, a war hero, an apostate Republican?

Has he hired or praised any more white nationalists?

Has he repeated his call for more restrictions on a free press?

The political wiseguys call it Trump Derangement Syndrome, and the northeast, and especially Boston, is terribly afflicted.

During Obama’s eight-year tenure, it was quite normal to go a few days or even a week without even thinking of the president, of wondering and especially worrying about what he had said or done. With Trump, it is impossible to go eight minutes without wondering what he is up to, always fearing the worst.

The 12 months that have followed Donald Trump’s election have been taxing. Just keeping up with his misanthropy takes so much mental energy.

She is not alone. The same news media that greased Trump’s path to the improbable nomination and even more improbable election hangs on every word, every malapropism, every outrage, every tweet. On the cable news programmes, it’s all Donald, all the time. Every late-night chat show host devotes almost every monologue to Trump. He’s comic gold, and if we weren’t laughing, we’d all be crying.

It is common for the home page of my newspaper’s website to be dominated by Trump or reactions to Trump, every day, all days. Typically, about half of the most-read and commented on stories in the Boston Globe are those involving Trump. The other half are about sports, suggesting that diversions from Trumpmania are essential, too.

It wasn’t like this under Obama. Not even close.

Boston mayor Marty Walsh, whose parents left Connemara in the 1950s, is running for re-election, ostensibly against a city councilor named Tito Jackson who is trying to become the city’s first African-American mayor.

But Walsh is really running against Trump, and in doing so is capitalising on the local hostility to the president across all racial and socio-economic lines. While campaigning, Walsh has mentioned Trump far more often than Jackson.

When federal immigration agents, unleashed by the Trump administration, began rounding up undocumented people, Walsh proclaimed that all the undocumented were welcome to take sanctuary at Boston City Hall. He was serious.

The Massachusetts governor, Charlie Baker, has denounced Trump repeatedly, and proudly said he didn’t vote for him. And Baker is a Republican.

Trump has inspired more than whingeing and handwringing. He’s inspired action. Boston was among the cities with the biggest turnouts for anti-Trump protests in the wake of his election. Women and minorities, in particular, have taken to the streets.

When a group of pro-Trump white men held a rally on Boston Common a week after a woman was murdered at a white supremacist march in Virginia, they were swamped by tens of thousands of counter-protesters.

Under the Obama administration, immigration agents were instructed to focus their limited resources on those who had committed serious crimes. But Trump wants numbers – bigly numbers – so now immigration agents are rounding up whoever they can get their hands on. Agents have gone to hospitals, schools and places of worship once considered off-limits.

“They’re not arresting criminals,” said Cameron. “They are going after low-hanging fruit, the easiest people to get. And they are splitting up families, causing needless heartache and ruin when there are plenty of serious criminals they could go after. This is all about numbers.”

One of Cameron’s clients, Francisco Rodriguez, fled El Salvador 12 years ago after gangs targeted his business and murdered a colleague. He settled in Boston, got a job as a janitor, got married, had children, and started a carpet-cleaning business. He’s what Trump calls a job creator.

After his application for asylum was rejected, his stay of removal was routinely approved for years as long as he showed up to renew it. But at his annual renewal in June, instead of stamping his papers, newly aggressive immigration agents locked him up to await deportation. Officials would not let him visit his wife when she went into labour prematurely with a high-risk pregnancy, or see his son after the child was born.

“There’s a new meanness in this country, unleashed and emboldened by Trump,” Cameron said.

With the family’s breadwinner gone, Rodriguez’s three children, all US citizens, will be forced to go on public assistance, adding to the welfare rolls Trump promised to slash.

If deporting Francisco Rodriguez and separating and impoverishing his family is supposed to Make America Great Again, is it any wonder that people in the Dublin 4 of America have Trump Derangement Syndrome?