Podcast: Denials and admissions in Washington 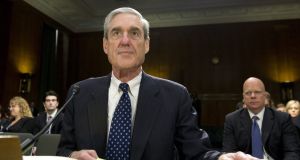 Special prosecutor Robert Mueller is heading up the investigation into Russian meddling in the 2016 US presidential election. File photograph: Saul Loeb/AFP/Getty Images

On this week’s podcast Washington Correspondent Suzanne Lynch looks at the first indictments made by special prosecutor Robert Mueller in his investigation into links between Russia and the Trump campaign, including a revelation that shook Washington and may be Donald Trump’s biggest problem yet.

Listen to the Podcast

The podcast also hears from Europe Editor Patrick Smyth in Brussels, where Catalan independence leader Carles Puigdemont has travelled, or fled, after Spanish prosecutors raised the prospect of charges being brought against him and other separatists. And Guy Hedgecoe is in Barcelona, where Puigdemont’s flight is not going down well among supporters.