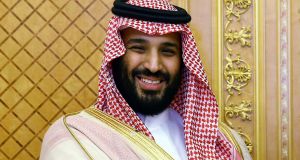 Saudi crown prince Mohammed bin Salman has shaken the kingdom to its foundations by detaining senior princes, ministers and wealthy businessmen and firing serving ministers in a drive to eradicate corruption.

Saudis are shocked as these high profile detentions and dismissals have violated the traditional Saudi practice of secretively sidelining rival princes and covertly demoting unwanted ministers and officials.

“Nothing like this has ever happened before in the history of Saudi Arabia,” said US regional expert David Ottaway, who thinks that it could “threaten the House of Saud’s stability for years to come”.

Among the princes detained are three sons of the late King Abdullah: national guard commander Miteb, deputy defence minister Fahd, and former Riyadh governor Turki. Their removal eliminates the family’s hopes of joining those Saudi princes who might challenge the crown prince’s bid to consolidate his hold on power ahead of the abdication of his father, King Salman.

Prince Mohammed had already removed and put under house arrest the man he succeeded, Crown Prince Muhammad bin Nayef, from his own branch of the family. The death in a helicopter crash on Sunday of deputy governor of Asir province, Mansour bin Muqrin, whose father had also been slated for the throne ahead of Prince Mohammed, has sparked conspiracy theories.

Prince Alwaleed bin Talal and construction mogul Bakr bin Laden are among the leading figures arrested from the powerful business community. The rest of those incarcerated include former ministers, an admiral and CEOs of public companies. Most of these men are being held for enriching themselves while serving in key positions, although this had been seen as their right.

Although the cleaning up of corruption will be welcomed by local and foreign firms operating in the kingdom, the shock-and-awe strategy adopted by the crown prince could sow doubt about the reliability of Saudi commercial enterprises and the country’s stability.

The abrupt clampdown on corruption could exacerbate criticism of other risky policies adopted by the young, impetuous crown prince. Prince Mohammed’s “Vision 2030”, an economic reform programme designed to reduce the kingdom’s dependence on oil, has faltered. His attempt to isolate Sunni Saudi Arabia’s Shia rival Iran, by attacking Tehran’s allies, has failed. He has waged an expensive and destructive war in Yemen, sponsored jihadi groups that did not topple Syria’s government, and instituted a divisive blockade of Qatar.

This would have been an encounter unacceptable to Riyadh, particularly since Hariri had been co-operating with Lebanese president Michel Aoun, who is aligned with Hizbullah, which Saudis see as Iran’s main military asset in the region.

Prince Mohammed’s recent pledge to return Saudi Arabia, which is the source of Muslim radicalism around the world, to “moderate Islam” is regarded by experts as unrealistic. The dynasty won power in the Arabian peninsula in partnership with the 18th century puritan Sunni Wahhabi sect which considers heretical other interpretations of Islam and brands Shias apostates.

Although the Saudi religious police have been disbanded and conservative clerics jailed, the immoderate tenets of Wahhabism permeate the society, are enshrined in school books, and determine the policies of the ruling family.

Even the younger generation, which Prince Mohammed claims he represents, is infected with Wahhabi thinking. More than 2,500 Saudis – the second largest contingent – joined Islamic State and other radical groups fighting in Syria and Iraq while Saudi jihadis have carried out dozens of attacks in the kingdom targeting mosques, police posts and civilians.