‘The clown who wanted to be king’: What the papers say about Boris 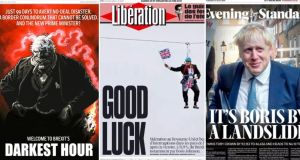 The front pages of the UK’s Independent, France’s Liberation and the Evening standard.

The UK’s incoming Prime Minister, Boris Johnson, is the subject of editorials and comment pieces at home and abroad.

“The Queen’s jester,” was the headline in France’s Libération as Boris Johnson prepared to enter No 10 Downing St.

In a scathing portrait of the new prime minister, Le Monde said Johnson was “known for his eccentricity, his elastic positions, his narcissism and his lies”. His “insatiable need to be liked and phenomenal aplomb” meant anything was possible, the paper said. “Boris Johnson has a rendezvous with history – his lifelong dream.”

Libération said Johnson would “have to move fast to unveil his Brexit strategy” – something of a problem as “the possibilities open to him to keep his promise of leaving the EU by 31 October are extremely limited ... If the British government has changed, the obstacles remain the same.”

In its portrait of the former London mayor, the paper said Johnson was “finally about to imitate his idol, Winston Churchill, by taking his country’s destiny in hand at a time of existential crisis. But he has promised not blood, toil, tears and sweat, but a brilliant future – because the UK is ‘a great country’.”

Johnson “advances by the seat of his pants”, the paper said, “like a chameleon, adjusting his positions according to the moment, counting on his people skills and perhaps his luck. For long, his eccentricity and self-mockery – the essence of Englishness – saved him. That may no longer now be the case.”

In Germany, the Frankfurter Allgemeine Zeitung was equally brutal. “The clown who wanted to be king of the world” was its headline. Given Johnson’s well-known nonchalance and complete unpredictability, “Britain’s political drama is about to begin an act which will have its entire audience holding their breath.”

Der Spiegel said Johnson had been “dreaming of this for decades. But once he begins his new life as prime minister, he will have to stand in front of the door to No 10 and explain to his compatriots what he actually plans to do. And at that moment, he will begin breaking his promises.”

In recent weeks, the magazine said Johnson’s “one-of-a-kind talent for talking a lot without really saying anything” had allowed him to “pledge all kinds of things to just about everyone. He cannot keep all of them.” His charisma “has got him far”, it added. “Now he has to show he has powers of leadership, not just of seduction.”

‘Send in the Tory clown’

Die Welt said the hour of truth was fast approaching. “Johnson is about to enter No 10,” it said. “He must now prove he can master the country’s worst crisis since the second world war. It is not just the opposition that doubts he can.”

The Dutch daily NRC Handelsblad said the new prime minister would soon learn that “what he promised as a candidate cannot be achieved as prime minister. Over the past few years, Boris Johnson has in his speeches and columns claimed that he knew far better than Theresa May. Now he’s going to have to negotiate.”

The Daily Mail, which has long championed Mr Johnson, in its leader says Mr Johnson’s acceptance speech was fitting for the summer weather.

It says: “Having finally secured the job he craved so desperately for so long, Boris Johnson’s acceptance speech yesterday was a typically bravura performance. Overflowing with optimism and bonhomie, he bathed the Tory faithful in balmy sunshine.”

But the paper cautioned that despite the “stirring words, now the real work begins”.

The Daily Mirror, which has never been Mr Johnson’s biggest supporter, titles its editorial: “Send in the Tory clown.”

It goes on to says that the new prime minister “inhabits a weird, make-believe fantasy world in which truth is the enemy, struggling to be honest about Brexit or any issue requiring sound judgement”.

The Daily Telegraph - which calls the new PM the “Dude” - contains a column from Philip Johnston pushing for “a snap election to replace this paralysed Parliament”.

The paper’s editorial calls the change of prime minister “a new chapter after three wasted years”. It adds: “His first task is to construct a Cabinet with the expressed purpose of delivering Brexit by October 31st.”

The Guardian’s editorial warns that “With Boris Johnson as PM Britain faces a hard Brexit after years of a clown.”

It adds: “The Conservative party has finally got a leader it deserves ... (Mr Johnson) faces the most daunting challenge - that of how the UK can leave the European Union - on entering No 10 since Winston Churchill in 1940.”

While Sun columnist Trevor Kavanagh writes confidently that “Boris will lead the Tories to victory in the next general election and put Brexit to bed”.

The Times’ editorial cautions that the Irish border remains a stumbling block.

It says Mr Johnson “has assembled a wide coalition of opinion within his own party that has taken him to the highest office. Holding that coalition together while making concrete proposals about the Irish backstop might prove altogether more difficult.”

‘An obscene ascent to power’

Daniel Finkelstein, in an opinion column in The Times, says Mr Johnson’s best hope of survival is “gambling everything on going to the country”.

Meanwhile, on the other side of the Channel papers have also covered the new tenant at Number 10.

Danish title Politiken carries a leader column which pulls no punches, claiming that Mr Johnson - like US president Donald Trump - has “built his entire career on shameless lies and extreme self-promotion”.

Headlined “That a clown like Boris Johnson is set to become prime minister in the UK shows just how low the country has fallen since the Brexit referendum”, the column says British people deserve better leadership.

“The British people deserve much, much better political leadership than what they’ve got. And now one of the worst is becoming prime minister.

“Johnson’s victory is the epitome of injustice. It’s an obscene ascent to power.

“Johnson has - not unlike US president Donald Trump - built his entire career on shameless lies and extreme self-promotion.”

He writes: “It will not be easy for him. From the situation in which he has manoeuvred, there is no apparent way out.

“With the solemn summoning of willpower and optimism alone, no state can be made. There must be more, much more.”

Three Flemish language Belgian titles all make reference to Brexit in their coverage - De Morgen writes the EU is “not afraid of Johnson”, de Standaard says Johnson “had 100 days”-— a reference to the Brexit deadline of October 31st - and De Tijd writes “The loot has been secured”.

The Irish Times, in a strident editorial, refers to Johnson’s elevation as “a new nadir” for the UK.

It says the best hope for Ireland, Europe and “British citizens themselves — is that Johnson as prime minister will be guided by three of his worst traits, which together have defined his career: he doesn’t mean a word he says, he is obsessed with power and he is willing to betray those closest to him in the pursuit of that power.”