Canadian police have released CCTV footage of murdered couple Australian Lucas Fowler (23) and American Chynna Deese (24) visiting a petrol station in Fort Nelson, days before their bodies were discovered alongside a remote highway. 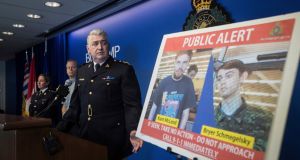 Security camera images of suspects Kam McLeod (19) and Bryer Schmegelsky (18) are displayed during a news conference where police said the two British Columbia teenagers - who were first thought to be missing - are now considered suspects in the deaths of three people. Photograph: Darryl Dyck/The Canadian Press/AP.

Canadian police have identified two teenagers who were previously feared missing as suspects in the double murder of Lucas Fowler (23) and Chynna Deese, (24) on a remote highway in northern British Columbia, Canada.

Kam McLeod (19) and Bryer Schmegelsky (18) were considered missing persons in a potentially related case that happened several hours away on the same highway.

But a spokesperson for the Royal Canadian Mounted Police (RCMP) told reporters on Tuesday that the the pair are considered suspects in the murders of Fowler and Deese – as well as that of a second unidentified man whose body was found several miles away from McLeod and Schmegelsky’s burning truck.

The two men have since been spotted in northern Saskatchewan, RCMP spokesperson Janelle Shoihet told the conference.

The pair are considered dangerous, Ms Shoihet said. She said: “If you see them, do not approach, take no action, and immediately call 911.” – Guardian News and Media 2019