No end in sight to conflict which has seen some 150,000 civilians displaced 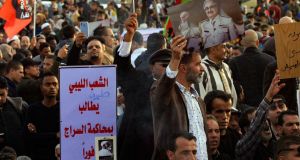 Each night, at home in western Tripoli, Asma makes a calculation. Is an explosion likely to rip through her wall, coming from the direction of the fighting, meaning she should sleep in her brother’s room rather than her own? Might there be no clashes today? Or does she even care anymore?

The soft-spoken 26-year-old, who asked for safety reasons for her first name only to be used, is terrified of violence, yet questions whether death would be a release.

Asma is one of hundreds of thousands of civilians caught up in Libya’s civil war, which began a year ago on Saturday. More than 300 civilians have already been killed and 150,000 displaced, according to the UN. Almost 345,000 people are in effectively living on the frontline.

Now, Asma is also under a coronavirus lockdown, with 11 confirmed cases and one death in Libya. Her family are all at home together, “in quarantine from Covid and war”.

“I can see my dreams paused,” Asma said this week, during a call through an online messaging service. “You feel like you’re dead but you’re alive. Like hell. Actually it’s like hell.

“Every single night we hear bombings and the military in the street. If I go on the roof I can see it. I’m too scared to do this. But from the window I can hear it ... The sound is very loud. And you can hear the cars. The ambulance cars.”

On April 4th, 2019, eastern general Khalifa Haftar ordered his self-styled Libyan National Army to advance on Tripoli in a bid to take the capital. The Tripoli-based, UN-recognised Government of National Accord – a weak administration propped up by a collection of militias – fought back.

Other countries, including Turkey, the UAE, France and Russia, began to send money, weapons or mercenaries to one other of the sides in an escalation that prolonged the conflict and increased the toll on civilians caught in the middle.

Both sides have now been accused of carrying out war crimes, including recruiting children, indiscriminate attacks in civilian areas, and targeting detained refugees or using them as human shields.

The last year has been a propaganda war too, with both the GNA and LNA hiring public relations firms with offices in Washington DC and London. Despite this, requests for interviews with the GNA went unanswered, while an LNA spokesperson was not available in time for publication.

“The human impact ... has been immense since the return to hostilities a year ago. This is a milestone nobody wanted to celebrate,” said Niels Scott of the UN Office for the Co-ordination of Humanitarian Affairs. “ The UN has called repeatedly for a ceasefire and never so urgently because of Covid-19, to enable public health workers to do their jobs.”

Libya has been in turmoil since 2011, when former dictator Muammar Gadafy was ousted from power and killed. Gadafy had been in charge of the country for more than 40 years.

Though Libyans initially celebrated his downfall, the country quickly became consumed by fighting as militias battled for territory, power and resources.

“There’s no winning in this war,” said Mohamed Omran, a Libyan analyst. “This is a dirty war, so both sides are using everything you can use . . . They don’t hesitate. They don’t think about the civilians, how they are suffering. The country will be destroyed, burn up.”

Democratic elections, first scheduled for 2018, and then 2019, now seem unlikely to happen.

Early March saw the resignation of UN envoy for Libya Ghassan Salame, who was charged with attempting to negotiate peace.

“For two years, I tried to reunite Libyans and restrain foreign interference,” Salame said, “but for health reasons I can no longer continue with this level of stress.”

Libyans who can afford to are fleeing the country, with some even attempting the dangerous Mediterranean crossings long associated with sub-Saharan Africans.

In late December, The Irish Times was on board the Alan Kurdi rescue ship in the central Mediterranean as 32 Libyan men, women and children were rescued from a fibreglass boat. In interviews afterwards, they said they were desperate to reach safety.

Back on the front lines, there is no escape for Asma, who doesn’t have a passport because of a bureaucratic error in Libya’s crumbling institutions. She says she would be too afraid to try to cross the sea.

After the revolution, she said, the future of Libya was bright, but quickly “everyone started following the money”.

“It’s not a bad thing if you want to control everything, but at least leave the people alone.”