‘One in 15 people’ in London may already have coronavirus 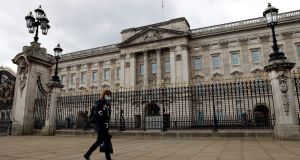 A woman wearing a face mask walks outside Buckingham Palace in London on Thursday. Photograph: Tolga Akmen/AFP via Getty Images

One in 15 people living in London could already be infected with coronavirus, according to a study by some of the UK government’s scientific advisers, but only 9,291 cases have been confirmed in the UK capital – a gap that underscores the lack of testing provision in the country’s biggest cluster.

Researchers at Imperial College London’s Covid-19 Response Team, whose earlier work contributed to the decision to lock down the UK last month, estimated in a paper this week that between 1.2 per cent and 5.4 per cent of the country’s population may have already been infected by March 28th.

Based on the mean of 2.7 per cent that would imply that one in 15, or about 600,000 people, in the capital have contracted the virus, when adjusting for Greater London’s population of 8.9m and the fact that it has roughly a third of all confirmed cases. The city has suffered a similar proportion of all deaths in the UK so far.

However, the range in the study could mean as many as one in eight Londoners have been infected or as few as one in 33, according to Financial Times calculations that were reviewed by one of the paper’s authors.

The government’s policy of only testing severely ill patients and those in localised settings, such as care homes, has come in for mounting criticism. It stands in stark contrast to recommendation by Tedros Adhanom, the head of the World Health Organization, to “test, test, test”.

The government has also come under fire over its failure to test more frontline National Health Service workers after admitting earlier this week that only 2,000 out of 500,000 had been tested.

Ministers have made repeated promises to increase testing but progress has been slow so far. Many scientists argue that targeted, large-scale testing is crucial in stemming the spread of the virus because many people who become infected show no or very mild symptoms and continue to spread it to others.

The paper, which has been submitted for peer review, is among the first to estimate totals, including asymptomatic and mild cases, creating a model to “back-calculate” a range of totals from the number of observed deaths.

“We estimate there are orders of magnitude fewer infections detected than true infections, mostly likely due to mild and asymptomatic infections as well as limited testing capacity,” the paper, published on March 30th, said.

But the study cautions that the data the team’s estimates are based on is still relatively limited, given the rapid pace of the virus’s spread since it emerged in Wuhan, China, late last year. There is usually a lag of about four weeks between infection and death for the relatively small percentage of people who succumb to the virus.

The paper, which examined 11 European countries, argues that cross-continental lockdowns have already saved between 21,000 and 120,000 lives.

“It is too soon to say if we have managed to fully control epidemics and more difficult decisions will need to be taken in the coming weeks,” said Dr Samir Bhatt, an infectious disease epidemiologist at Imperial College’s School of Public Health and a lead author on the paper.

The UK government’s decision to lock down last month was partly influenced by fears over the virus’s rapid spread in London.

London’s relatively high rate of infection suggests further measures may be needed. Although traffic on public transport has fallen sharply, there are still complaints of crowded rush-hour underground trains after Transport for London cut back services.

Scientists have said antibody testing will be key in determining actual rates of infection. “The impact of the pandemic is extreme – but it would have been much worse without the interventions,” said Professor Axel Gandy, another of the paper’s authors. It is a view backed by many other scientists tracking the virus.

Tim Colbourn, an epidemiologist at University College London’s Institute for Global Health, said the rate of spread in London suggested by the paper “seems plausible, with the available data”.

“But we are nowhere near herd immunity yet and are unlikely to be for months, at best. The only way out of lockdown is with massively scaled up testing and contact tracing, ideally at a much more local level. I agree there are many more infected than the tests show as we’ve not been doing community testing for weeks and it was spreading a lot, especially before the lockdown,” he said.

A study last week by Oxford university estimated an even higher rate of infection, but was criticised by parts of the scientific community for being too speculative.

When the high number of estimated cases in London based on the Imperial College study are stripped, it suggests a lower percentage of infections outside the capital, though epidemiologists said this could change quickly in the coming weeks.

The FT’s calculations based on Imperial’s mean estimate imply approximately 1 in 50 people outside London have been infected as of March 28th, though that is still more than 1.2m people.

At the high end of the estimated range, using 5.4 per cent of the total population, it could already be one in 24 people outside London.

The earlier study by the college suggested that the UK would have faced up to 250,000 deaths if the government had continued with its more relaxed approach on social distancing and isolating, which stopped far short of a full lockdown until late March. – Copyright The Financial Times Limited 2020