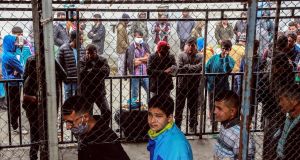 Migrants and refugees, some wearing face masks for protective measures, queue in a makeshift camp next to the Moria camp on the Greek island of Lesbos. Photograph: Getty

Doctors and aid groups have warned of a looming disaster as the coronavirus pandemic threatens to hit camps for migrants and refugees across Europe.

It comes after Greek authorities placed the Ritsona camp for asylum seekers under quarantine, as 23 migrants tested positive close to the capital, Athens.

Across Europe, tens of thousands of people who have fled war and poverty live in squalid conditions in makeshift encampments.

One of the worst is the Moria refugee camp on the Greek island of Lesbos. Built to host just 3,100 people, it is now home to over 20,000, 60 percent of them women and children.

Claire Dunne, a Médecins Sans Frontières doctor who recently returned to Ireland from Moria, described unaccompanied children sleeping on bare ground, raw sewage, and “horrific” conditions with just one tap per 1,300 people in parts of the camp.

Regular hand-washing, social distancing and isolating the sick is impossible in a place where people are crammed into rows of tents, and there is just one toilet per 167 people, she said.

“Once Covid-19 comes into the camp there’s no way it can be contained, in my opinion, in a humane and dignified way,” said Dr Dunne.

“When I was there I saw how very difficult it was to contain an infectious disease like scabies, a skin infection, which normally requires prolonged skin-on-skin contact for transmission. For Covid-19 it would be so much worse.”

Dr Dunne warned that those living in such camps already had vulnerable immune systems and were wracked with respiratory infections and diarrhoea due to poor nutrition, and the cold, damp and unsanitary conditions in which they were forced to live.

The International Rescue Committee (IRC), which was founded to help people escape Nazi Germany, has calculated that Moria camp has a denser population than the Diamond Princess, the cruise ship on which coronavirus spread rapidly in February.

The IRC and MSF have appealed for the most vulnerable people to be immediately evacuated from the camps, including the elderly and people with underlying medical conditions that make them more vulnerable to Covid-19, estimated to be between 5 and 10 per cent of the camp population.

Ireland is among seven European Union members that promised to take in unaccompanied refugee children from Greece, but the transfer of eight minors to Ireland who had been vetted and approved was delayed by the pandemic at the last minute.

EU members have tried and failed for years to agree on a common system to process and settle migrants, leaving large numbers of them to build up in poor conditions in border states. Arrivals continue even as the pandemic worsens.

The European Commission has said it is the responsibility of Greece to manage any outbreak of the disease in migrant camps. But Nickolas Panagiotopoulos of the IRC warned the local health system was fragile after years of austerity, and not designed to cope with tens of thousands of extra patients.

“There were severe cuts in the public system including in health. Of doctors, nurses . . . whole clinics and hospitals have shut down. The capacity of the Greek state is not sufficient to deal with the potential pandemic outbreak,” said Mr Panagiotopoulos.

The pandemic hit after a reduction in the number of NGO staff on the ground due to a series of attacks on aid workers and facilities, amid growing local tensions over the presence of the migrant camps.

Mr Panagiotopoulos called on European leaders to “uphold the humanitarian values on which the European Union was founded after the second World War”.

“They are real people, not just numbers,” he said of those living in the camps. “It’s about who we are. Who are we as Europeans.”