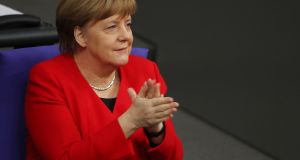 Chancellor Angela Merkel, with a flash of Churchillian passion, vowed to push for an orderly UK departure from the EU “to the last day, to the last hour”g. Photograph: Hayoung Jeon/EPA

With an uncharacteristic flash of Churchillian passion, German chancellor Angela Merkel has promised to push for an orderly UK departure from the EU “to the last day, to the last hour”.

Her promise follows a new German study suggesting the Republic of Ireland would be the second-biggest economic loser from a hard Brexit, with an annual loss off economic power equivalent to €720 per head of population.

After Ireland (€720 per capita), the study says a hard Brexit would hit hardest, in order, France and Italy.

“Brussels and London have to do everything to order a departure,” said Aart De Geus, chief executive of the Bertelsmann Foundation.

Some 1,001 days after the Brexit vote, with just eight days until the scheduled Brexit departure date, Dr Merkel told the Bundestag yesterday she agreed with European Council president Donald Tusk’s analysis. A short extension of the March 29th deadline until the end of June, as requested by British prime minister Theresa May, was possible in theory.

But only, the chancellor said, if parliament backs the Brexit agreement agreed between London and Brussels.

“We can meet this request . . . we need an orderly Brexit, this is also in the German interest,” said Dr Merkel ahead of a gathering of EU leaders in Brussels yesterday. “However much we are working towards an orderly solution, for weeks and months we have prepared for the fact that there could be a disorderly departure.”

Mrs May’s request would also have to take into consideration any legal concerns regarding the European elections at the end of May, the German leader added.

“But no doubt we can talk positively about a short extension,” she added.

For Brexiteers expecting a last-minute extra wurst from Berlin, the German leader disappointed. The existing departure documents, in particular the more recent additions from Strasbourg, showed that “important and, in my view sufficient steps were taken”.

Looking to the future, she said relations would not be as close with the UK as when it was an EU member state, but the chancellor insisted that “the door to a close co-operation, in friendship and in common interest, from our side, stands wide open”.

For the order-loving Germans, their growing concern and alarm over the Brexit drama in London has collapsed decades of deep respect towards Britain. Now media coverage is characterised largely by exhaustion and mockery.

The conservative Frankfurter Allgemeine daily put a hamster on its front page, flagging a feature inside about stock-piling of medicines.

In the picture’s caption, the FAZ joked that London’s “unparalleled spectacle . . . a drama shot through with curious and unworthy spices” has left everyone “unsure whether to laugh or cry”.

Germany’s political class is similarly unsure how to respond to the Brexit drama. And not everyone in Dr Merkel’s centre-right Christian Democratic Union (CDU) is as magnanimous as the chancellor. Norbert Röttgen, head of the Bundestag foreign affairs committee, said he favoured a long extension or none at all.

“The EU cannot allow itself to become part of the political tactics of Theresa May,” he said on German radio. “Trump and Putin are laughing themselves silly at how Europe is carrying on.”

As Labour leader Jeremy Corbyn followed Theresa May to Brussels, its sister party in Germany – the Social Democrats (SPD) – called for a cross-party solution to overcome Brexit uncertainties.