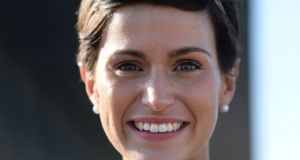 Maria Walsh says she does not come from the ‘pedigree’ side of Fine Gael. Photograph: Dara Mac Dónaill

Ruffling the feathers of people with a Fine Gael pedigree who hold traditional values will be an important contribution by the new candidates for upcoming European and local elections.

That is according to former Rose of Tralee, Maria Walsh, who attended her native county, Mayo’s local and European elections launch in the Michael Davitt Museum, Straide, on Monday.

Ms Walsh also emphasised the importance of county councillors – “the foot- soldiers” in the body politic – for informing the higher levels of representation about the priorities of its citizenry.

“We can have the strongest government in place but if we do not have reciprocal communication and the support of our local authority candidates, who I call her foot soldiers, we are not in tune with our communities and citizenry as they are their direct representatives. When I started to consider running for politics it was to county councillors I went to for advice, because they are the champions of the people,” Ms Walsh said.

She added: “I don’t come from the ‘pedigree’ side of Fine Gael and neither do a lot of the new candidates running for the party which makes this a very exciting time,” Ms Walsh said.

She said she was “blown away” by the support she has been receiving from Fine Gael party members and so honoured to come from the little cosmopolitan village of Shrule [on the Mayo-Galway] border while running alongside the “exceptional and formidable” Mairéad McGuinness and supported by such Fine Gael stalwarts as Minister for Rural and Community Development Michael Ring.

“I am not making gender an issue but having four women out of the 18 candidates running in Co Mayo is exciting. It is ensuring that our communities are represented in a broad way and that is not about sexual orientation, creed or country of origins but about putting your hand up for your community,” Ms Walsh said.

She thanked Minister Ring, who officiated, for being “such a champion for rural Ireland” and, moreover, her “champion” since she put her name forward. Saying that he had “the pleasure of proposing her at convention”, Minister Ring said that “for somebody who was a novice to politics, she has nothing to learn”.

In a scathing attack of the Fianna Fáil-Independents controlled Mayo County Council, he said the last five years had been “nothing but a disgrace”.

“The county council can no longer be subsidised by the ratepayers who are being put out of business by the constant increases,” he said.

He cited a list of investments made in the county under the Fine Gael government, including Ireland West Airport Knock, the greenways and Wild Atlantic Way. “If I get to June 9th this year I will have served 25 years in Dáil Éireann and I spent 17-and-a-half of those in Opposition. The only place you can get anything done is in government,” Minister Ring said.

The retirement of Taoiseach Enda Kenny and his brother Cllr Henry Kenny from politics was cited by a number of speakers.

Senator Michelle Mulherin said: “We haven’t got a Kenny on the ticket this time. It is definitely the end of an era and we should remember Enda and Henry’s harvest for Co Mayo over the decades.”

Enda and Henry Kenny’s father, Henry Snr was first elected to the Dáil in 1954. Fine Gael’s Mayo whip, Cllr Jarlath Munnelly strongly criticised the lack of transparency and accountability within Mayo County Council during the last term of office. He cited a €30 million loan, half of which went to legacy debt as “the biggest mistake of the last five years”.

He quoted Michael Davitt, who coincidentally was born on March 25th, and for whom the curator of the centre, Yvonne Corcoran-Loftus had organised a birthday cake. “Davitt said ‘If the Irish have a weakness greater than drink, it is moral courage’.

“I am reminded here as we all gather here today ahead of the elections that we all need to show courage,” Cllr Munnelly said.