India to send surveyors to find out if Everest has shrunk 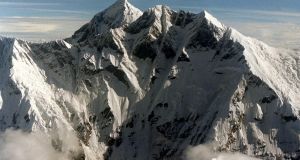 Anyone who aspires to climb Mount Everest might already be one inch closer to their goal.

Indian scientists have announced they will send an expedition to the peak of Mount Everest to confirm theories that Nepal’s devastating 2015 earthquake shrank the world’s largest mountain.

The 7.8-magnitude earthquake killed thousands of people and reshaped the landscape across the Himalayan nation.

Satellite readings have suggested the impact of the earthquake reduced Everest’s height - officially recorded by India and Nepal as 8,848 metres (29,029ft) - by somewhere between a few millimetres and an inch.

But ongoing doubts within the scientific community have prompted India’s surveying agency to find out for sure, said India’s surveyor general, Swarna Subba Rao.

Mr Rao said he would be sending a team to the peak of the mountain including three or four agency officers “who are physically fit, able-bodied and qualified to go”. “The rest will be professional mountaineers,” he said.

They will spend around two hours at the summit, enough time to take GPS readings of the distance between their coordinates and satellites orbiting above. The data - accurate to within a centimetre - will take around two weeks to be processed.

To cross-check, a team will also be deployed to measure the mountain the old-fashioned way: by triangulation, the same method used by the Welsh surveyor Sir George Everest, an earlier boss of India’s surveying agency, to determine the peak’s height in the 1850s.

It involves standing at a horizontal surface at a known distance from the mountain, and using a high-powered, telescopic protractor to determine the angle between that point and the peak. In other words, trigonometry.

The first attempts to determine the height of Mount Everest by this method recorded it accurately to within 30ft. The precise height has since been the subject of some controversy, including over whether the figure should include the mountain’s snow cap or just the rock underneath.

Mr Rao said the expedition would involve the usual level of danger but that he had been inundated with volunteers among his staff. “The risk is compensated by the recognition,” he said. “They will be recognised as having summited the mountain.”

He said the expedition, which will cost about US$700,000 and be conducted jointly with the Nepal government, would happen when conditions and staff were ready.

“We’re preparing our people, acclimatising them, training them in mountaineering,” he said.

The new, updated height would be used to assist in scientific studies and to determine the position of the underlying plates, he added.