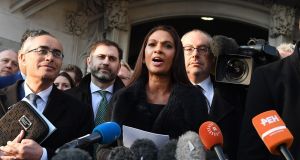 Gina Miller, the lead claimant in the article 50 case, delivering a statement outside the supreme court in London on Tuesday morning. Photograph: Andy Rain/EPA

The supreme court ruling that Theresa May cannot trigger article 50 without a vote in parliament may have been a defeat for the government but it was never likely to derail its Brexit timetable. And its decision that devolved legislatures in Northern Ireland, Scotland and Wales do not have to be consulted beforehand removes a potential headache for the prime minister.

An overwhelming majority of MPs voted last month in favour of May’s March 31st deadline and Labour has promised not to block the article 50 notice, although some of its MPs are likely to join Liberal Democrats and Scottish Nationalists in voting against the government.

The government had argued that, under Britain’s constitution, it can use “royal prerogative”, or executive power, to agree or withdraw from international treaties, including those governing its EU membership. But the supreme court ruled by a majority of eight to three that, when parliament passed the European Communities Act in 1972, it did much more than simply authorise the government to sign an international treaty.

Instead, the 1972 Act “effectively constitutes EU law as an entirely new, independent and overriding source of domestic law” and the European Court of Justice as a source of binding judicial decisions about its meaning. Crucially, withdrawing from the EU represents a change which is different “not just in degree but in kind” from the abrogation of particular rights, duties or rules derived from EU law.

It would thus constitute as significant a constitutional change as that which occurred when EU law was first incorporated into domestic law by the 1972 Act.

“It would be inconsistent with long-standing and fundamental principle for such a far-reaching change to the UK constitutional arrangements to be brought about by ministerial decision or ministerial action alone,” the court said.

The court offered some comfort to the government in saying that any legislation to authorise triggering article 50 can be as short as ministers wish, making it more difficult to amend as it goes through parliament. Brexit secretary David Davis told MPs on Tuesday that the government would introduce a “straightforward” Bill within days, authorising the prime minister to trigger article 50.

Labour leader Jeremy Corbyn has suggested that his party could seek to amend the legislation in order to influence the Brexit negotiations and the Scottish National Party has promised dozens of amendments. Prescriptive amendments related to policy issues such as workers’ rights, the customs union or the single market are unlikely to succeed. But there could be wide, cross-party support for amendments that would oblige the government to consult parliament more closely throughout the Brexit negotiations.

Legislators in Belfast, Edinburgh and Cardiff will have no such opportunity, however, as the court threw out all the applications demanding a right of consultation for the devolved assemblies. The court accepted that the constraint on devolved legislatures that they must not enact legislation in breach of EU law assumed that the United Kingdom would be part of the EU. But it ruled that this assumption is consistent with the Westminster parliament being allowed to determine whether the UK would remain in the EU.

“In imposing the EU constraints and empowering the devolved institutions to observe and implement EU law, the devolution legislation did not go further and require the United Kingdom to remain a member of the European Union. Within the United Kingdom, relations with the European Union, like other matters of foreign affairs, are reserved or excepted in the cases of Scotland and Northern Ireland, and are not devolved in the case of Wales,” it said.

In the case of Northern Ireland, the court also rejected the argument that leaving the EU could breach Section 1 of the Northern Ireland Act, which allows for a majority in the North to decide to leave the UK and form part of a United Ireland.

The supreme court did not rule on what could be the most important question surrounding article 50 – whether it can be unilaterally revoked after notice is given. Later this week, British barrister Jolyon Maugham will apply to the High Court in Dublin in an effort to have that question referred to the European Court of Justice.

If article 50 is irreversible, a vote by MPs on the final deal agreed by Britain and the EU after two years of negotiations would effectively be a choice between accepting that agreement or walking away from the EU with no deal at all.