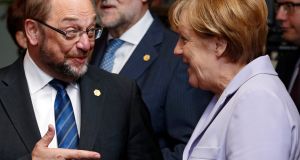 Martin Schulz with Angela Merkel: The former European Parliament president has been proposed to replace Sigmar Gabriel as head of the SPD, best able to challenge the chancellor in Germany’s September elections. Photograph: EPA/Julien Warnand

In a surprise announcement that shocked even senior SPD allies, Mr Gabriel described himself as more of a political liability than an asset to his party as Germany enters election season.

“If I ran, then I would fail and, with me, the SPD,” he told party insiders. “The party has to believe in its candidate and gather behind them.”

After mulling his future for six months, Mr Gabriel made up his mind to go after a private poll of SPD members showed Mr Schulz (61) as the more popular man to hinder a fourth Merkel term. He is likely to switch from economics to the foreign ministry.

Mr Gabriel, in comparison, has long been viewed as a mercurial and unpredictable figure. Just 19 per cent of voters backed him to challenge Dr Merkel in a public television poll last month, compared with 36 per cent for Mr Schulz.

A protege of ex-chancellor Gerhard Schröder, Mr Gabriel (57) ultimately failed to resolve tensions between the party’s leftist and centrist wings caused by the party’s ambiguous relationship to Schröder-era economic and social reforms.

An added challenge in the second grand coalition under Dr Merkel was the refusal of voters to reward him for delivering on core campaign promises, such as a minimum wage.

“Because the numbers refused to go up, he decided the person most likely to win should run,” said Johannes Kahrs, a leading centrist SPD figure.

The task of reviving and uniting the SPD now falls to Mr Schulz, adding another element of uncertainty for the struggling centre-left party in the run-up to September’s federal election.

After recovering from their shock on Tuesday, SPD figures welcomed Mr Schulz as someone untouched by the grand coalition, a dyed-in-the-wool European and antidote to Trump-style nationalism and protectionism.

While Schulz supporters praise him as a passionate and eloquent European, his critics dismiss him as the ultimate Brussels apparatchik.

Rather than join Dr Merkel’s cabinet, as previously speculated, Mr Schulz will likely concentrate on the SPD leadership and campaign. The centre-left party is running about 13 points behinds Dr Merkel’s Christian Democratic Union (CDU) in polls.

The biggest question thrown up by Mr Gabriel’s departure is whether it makes a centre-left coalition more likely after September’s federal election. The opposition Green Party declined to speculate, but the Left Party welcomed the move as a chance to unseat Dr Merkel.

“We would wish that the SPD under Martin Schulz will return to social democratic policy, but we will judge him by his acts, not his words,” said Sahra Wagenknecht, coleader of the Left Party in the Bundestag.

Mr Schulz is the fifth SPD leader to face Dr Merkel in her time as CDU leader and could prove a wild card in Germany’s election campaign. He grew up in a mining family in the western state of North Rhine-Westphalia and worked in a bookshop before entering local politics in 1987 and European politics in 1994.

As president of the European Parliament for the past five years, he was a regular face in German political debate, but always as an outsider. “Now he has to position himself on all domestic policy on an ad hoc basis,” said Volker Kronenburg, a political scientist at the University of Bonn.

The Gabriel-Schulz shock prompted delight in Dr Merkel’s CDU. “He’s going to have a difficult job arriving in Berlin and getting stuck into the minutiae of German domestic politics,” said Elmar Brok, a senior CDU MEP.

But CDU delight may be short-lived. Last month an ARD public television poll showed Dr Merkel and Mr Schulz neck-and-neck in the popularity stakes, on 57 per cent support.