British speeding fines to rise to 150% of drivers’ weekly income 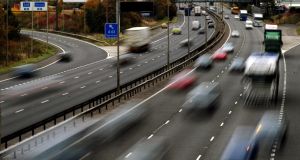 Speeding is one of a number of areas covered in new sentencing guidelines for magistrates’ courts in England and Wales published on Tuesday. Photograph: PA

Drivers responsible for the most serious speeding offences are set to face harsher penalties under new sentencing guidelines for magistrates.

Fines for motorists caught going well above the speed limit will start from 150 per cent of their weekly income rather than the existing level of 100 per cent.

It means, for example, someone who is sentenced for driving at 101mph or faster in a 70mph zone will now be dealt with in a more severe bracket.

The sentencing council said the move aims to ensure there is a “clear increase in penalty as the seriousness of offending increases”.

It follows responses to a consultation arguing previous guidelines did not properly take into account the increase in potential harm that can result as speed above the limit rises.

Speeding is one of a number of areas covered in new sentencing guidelines for magistrates’ courts in England and Wales published on Tuesday.

Magistrates are also being given new advice on how to approach animal cruelty.

For the first time additional aggravating factors of “use of technology to publicise or promote cruelty” and ‘“animal being used in public service or as an assistance dog” are being included – with the latter meaning police dogs or horses are specifically highlighted.

Magistrates’ courts deal with more than one million offenders across England and Wales each year.

The new guidelines, which also cover railway fare evasion, truancy and being drunk and disorderly, aim to reflect changes in the law since the they were last updated in 2008.

The sentencing council said the new guidelines are not intended to result in significant differences to current sentencing practice but will bring changes to sentencing for some specific offences.

District judge Richard Williams, a sentencing council member, said: “The magistrates’ courts deal with the vast majority of offenders in England and Wales, so it is essential that the guidelines they use are up to date and help ensure that sentences are applied consistently and effectively.”

The guidelines will be used to sentence adult offenders in all magistrates’ courts in England and Wales from April 24th.

He said: “Anyone who breaks the limit excessively is a danger to every other road user and is unnecessarily putting lives at risk.

“Hopefully, hitting these offenders harder in the pocket will make them think twice before doing it again in the future.

“While greater sentences for excessive speeders are obviously a deterrent, the best deterrent of all is more effective enforcement.”

“However, for enforcement to be successful, there must be the likelihood that offenders will be caught and prosecuted,” she said, adding that a declining number of dedicated road traffic police officers is of “real concern”.