Scotland will not be ‘imprisoned in the UK’, says Nicola Sturgeon 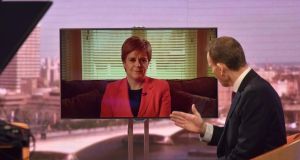 Nicola Sturgeon has insisted that Scotland cannot be “imprisoned in the UK against its will” and warned that Boris Johnson’s continued refusal to grant her the powers to hold a second referendum can only increase support for Scottish independence.

Speaking on BBC’s The Andrew Marr Show, the SNP leader and Scotland’s first minister said: “It really is such a subversion of democracy that you’re talking to the leader of the party that overwhelmingly won the election [in Scotland], and I’m under pressure to say what I’m doing because the mandate that I won is not going to be honoured by the party that got roundly defeated in Scotland. It is just such perversion and subversion of democracy that it will not hold.”

She told Marr that Scottish voters had “rejected the Tories, said no to Brexit and made clear we want our future in our own hands”, adding: “I don’t presume everyone who voted SNP of Thursday is yet prepared to back independence, but it’s not for me to decide that question, it’s not for Boris Johnson to decide, it’s for the people of Scotland.”

In Scotland, the SNP increased its share of the vote to 45 per cent, winning a greater proportion of the votes there than the Tories did across the UK, and also increased its number of MPs at Westminster to 47. In contrast, the Tories – whose campaign in Scotland was focused on opposition to a second independence referendum – lost more than half their Scottish MPs, from 13 to six.

‘Raging against the reality’

Accusing the Tories of “raging against the reality” of the markedly different election result in Scotland, Sturgeon said: “The risk for the Conservatives here is that the more they try to block the will of the Scottish people, the more utter contempt they show for Scottish democracy, the more they are going to increase support for independence.”

Referring to Conservative opposition in the late 1980s and early 1990s to the establishment of a Scottish parliament, she told Marr: “Recent history tells us that this dictatorial attitude of a Conservative government saying they will determine the future of Scotland, not the people of Scotland, doesn’t hold.

“If I’m sounding reasonably relaxed about this its because I know that the momentum and mandate is on the side of those of us who want Scotland to be able to choose our own future”.

Asked what she intended to do if Johnson continued to refuse to grant the section 30 order necessary for Holyrood to stage a legal referendum, Sturgeon said she would set out this week “the detailed democratic case for the transfer of power”, and repeated her pledge not to hold an illegal Catalan-style vote.

But she added: “I said to [Johnson] on the phone on Friday night, if he thinks saying no is the end of the matter, he’s going to find himself completely and utterly wrong.

“You cannot hold Scotland in the union against its will. You cannot just lock us in a cupboard and turn the key and hope everything goes away. If the United Kingdom is to continue then it can only be by consent. If Boris Johnson is confident in the case for the union then he should be confident enough to make that case and allow the people to decide. Scotland cannot be imprisoned in the UK against it’s will.”

Since the election, there have been numerous media reports of Johnson’s plans to “lovebomb” Scotland in the coming months, as he switches his focus from Brexit to the strengthening of the union.

Writing in the Scottish Mail on Sunday, the former Scottish Conservative leader Ruth Davidson challenged Johnson to ensure that the rhetoric of his one nation vision becomes a reality. She urged Johnson to keep his promises on Brexit to Scotland’s fishing industry and on support for farmers, consider Scotland’s specific immigration needs, and make extra infrastructure and research investment available north of the border, telling him that he had a “responsibility to reach out to Scotland, despite SNP attacks and grievance, to ensure no part of the UK feels left behind during his premiership”.