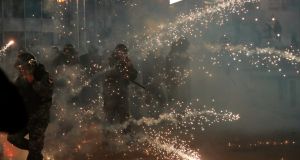 Lebanese riot policemen react to firecrackers fired by the supporters of the Shiite Hezbollah and Amal Movement groups, as they try to attack the anti-government protesters squares, in downtown Beirut, Lebanon, Saturday, Dec. 14, 2019. (AP Photo/Hussein Malla)

Protesters returned to Beirut’s central square on Sunday following significant clashes between protesters and security forces during 60 days of largely peaceful country-wide demonstrations against the government.

Riot police and troops fired tear gas and rubber bullets on Saturday when protesters tried to breach barricades to reach the parliament building and the nearby seat of government at the 19th century Ottoman Grand Serail atop a hill overlooking the epicentre of the protests at Martyrs Square.

Protesters pelted police with stones and set fires in rubbish bins to counter the effects of tear gas. The Red Cross and Civil Defence reported that 46 people were injured, including one security man, and dispatched to hospitals. There have been previous clashes at road blocks between protesters and security forces but none on this scale or at the main protest camp. Government forces were accused of using excessive force.

The fighting erupted shortly after police halted the second attempted assault this week on the protest camp by pro-government Shia Hizbullah and Amal groups who have repeatedly attacked gatherings. They are accused of seeking to provoke violence, sow division, and compel the authorities to ban and crackdown on demonstrations. Amal is particularly sensitive to criticism of its leader, Nabih Berri who is parliamentary speaker and will preside over a session tasked with formally nominating a new prime minister. Having resigned the post on October 29th, the outgoing prime minister Saad Hariri is set to be asked this week to form a new government.

Hariri is, however, at odds with the political parties on the composition of the cabinet. He argues that technocrats must be recruited to deal with the financial, social and political challenges Lebanon faces. His political bloc will press his case if parliamentary consultations go ahead today as scheduled. When this meeting does take place, Hariri will have to contend with Hizbullah which calls for a “national partnership government” including both allied and rival parties.

The movement’s leader Sayyed Hassan Nasrallah has warned this process will not be “easy” or quick.

Deeply indebted and financially struggling Lebanon does not have time to waste debating the allocation of portfolios by veteran party members who are rejected by hundreds of thousands of Lebanese demanding a completely new ministerial line-up. They insist this would not represent the sectarian power-sharing system which has been in place since Lebanon’s independence in 1943.

The protest slogan is, “All means all” politicians must go, including Hariri. Inter-national donors have told the politicians to meet protesters’ demands by insisting there will be no bail-out until a reformist government is in place.

Nasrallah’s words show he appears divorced from the Lebanon’s new reality. In 2000 Hizbullah was celebrated by both Lebanese and Arabs for forcing the Israeli army and its local clients to leave southern Lebanon which they had occupied since 1978. While retaining its arms, Hizbullah won respect and support among Shias by operating a major hospital, an orphanage, and clinics, and providing relief for the poor. Since joining the government in 2005, Hizbollah has become a political party allied to Amal and the Maronite Christian Free Patriotic Movement and wielded considerable power. Consequently, Hizbullah has sacrificed some public support by joining the corrupt establishment Lebanese reject.

Although Hizbullah retains thousands of loyal supporters, many young Shias have not only joined protests but also call for an end to the sectarian system which has empowered Hizbullah alongside Lebanon’s other political parties.