Baalbek Letter: Penal charges for internet service push people out on to the streets 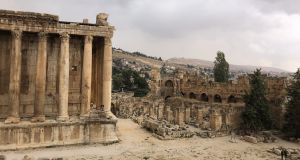 The Unesco-listed ancient Roman site in Baalbek, Lebanon: lacks the tourists such an attraction would draw elsewhere. Photograph: Joseph O’Connor

I should have known when I contacted the Palmyra Hotel in Baalbek before my visit to Lebanon that, for the proprietors, it was business as usual. After all, this is a hotel that prides itself on having never closed its doors in over a century, despite civil war, terrorist threats and neighbouring conflicts. What was a little political unrest in 2019?

The hotel had advised me not to be fazed by the multiple roadblocks emerging daily when driving east from the capital, Beirut. The result was a two-hour journey transformed into a five-hour excursion, keeping on the tail of locals as they navigated back roads – and sometimes off-road – to avoid the blockades. My rental car was getting a lot more work than it bargained for.

Anti-government demonstrations have been taking place throughout Lebanon, including in Baalbek, driven mainly by dire economic conditions. Poor governance has seen Lebanon become one of the most heavily indebted countries in the world. Government plans to introduce a 20 cent-a-day charge for internet phone calls, including on WhatsApp and Facebook, was the tipping point. People have had enough and the prime minister, Saad Hariri, has resigned.

For a place like Baalbek, once a tourist hotspot of the Middle East and still heavily reliant on visitor spending, it makes matters all the more difficult. Located in Lebanon’s Beqaa Valley, the city once attracted visitors from all over the world who came to see the Unesco-listed ancient Roman ruins and, in Baalbek’s heyday, an annual international music festival that drew big names in showbiz such as Nina Simone and Ella Fitzgerald.

Today, however, Baalbek is perhaps better known as a stronghold for Hizbullah, the Shia organisation that gained popular support as a result of its armed resistance against the 18-year-long Israeli occupation of south Lebanon.

“You have to understand that Baalbek and the region was always a bit lawless,” Rima Husseini, Palmyra Hotel’s owner-manager, tells me. “And because of a social fabric that’s very tribal, it’s difficult to govern. People always relate Baalbek to an outlawed region with drugs and violence in spite of this magnificent archaeological site.”

The Palmyra Hotel stands testament to the city’s better days, and serves as an open museum. In the foyer, there are photographs of various famous guests, and musings from French artist Jean Cocteau who stayed for one month in 1960. The Shah of Iran, Albert Einstein and George Bernard Shaw are among others who have passed through its doors, and I’m told I’m staying in the same room where former French president Charles de Gaulle once slept.

The hotel is in need of a major facelift but Husseini who, with her husband, took over the hotel in 1985, insists that’s part of its charm. Walking through the doors is like stepping back in time and she says she feels a responsibility to preserve its original aura.

An upstairs balcony provides a picture-perfect view of the nearby ruins juxtaposed with the sight of an army tank on patrol, part of a military presence that serves as a reminder that all is not well. The Roman site features an impressive array of temples dating back to the second and third centuries, but is devoid of the tourist numbers such an attraction would yield elsewhere. Outside, hawkers wait to flog postcards, fridge magnets and Hizbullah T-shirts.

Elsewhere in the city, people congregate at ATMs trying to withdraw money. Banks have been closing as a result of the protests, leaving locals uncertain about accessing their savings. In the evening, anti-government demonstrations continue and you can hear protesters sing and chant from the street below the hotel window. There have been calls from Hizbullah to boycott the protests, but many in Baalbek are clearly not listening.

Facing the challenges of accommodating Syrian refugees crossing the border and addressing the absence of law and order in the region, Baalbek has a difficult road ahead if it is to return to its former glory days. According to Husseini, before the protests, the city’s tourism industry had been getting back on track after a long time in the wilderness due to the Syrian war.

Nonetheless, what’s happening in Lebanon right now is seen by many of its citizens as something positive. In the Palmyra Hotel, Husseini offers a message of hope. “We have a resource that’s indescribable,” she says. “If you see the streets, you see that young, old, all types are out demonstrating. That’s the beauty of it, it’s a human resource and that was always the strength of Lebanon. This is what you need for tourism and business.”