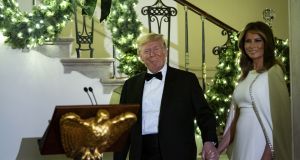 It was, all in all, a fine week for Donald Trump.

Sure, he’s getting impeached. And he is agitated about that, judging by his fandango of self-pitying tweets. And he did lose out to a 16-year-old girl for Time’s Person of the Year, which made him so jealous he couldn’t resist mocking her, amplifying just how big a loser he is.

But on a scale of one to prison, it wasn’t a bad week. His dishevelled pal, Boris Johnson, won in a landslide over an unappetising liberal, which many took as a good harbinger for Trump in 2020.

On the Hill, the party of Faust stuck together and vociferously defended their Apollyon. The most twisted defence was offered by Ken Buck, a Colorado Republican on the House judiciary committee, who said that it doesn’t make sense to impeach the president for obstructing Congress because “we were sent here to obstruct this Congress”. It was “a campaign promise”.

Even as Democrats declaimed that their hearings were momentous, many deemed them monotonous. The evening news broadcasts demoted impeachment to their No 4 story, and no one seemed to move a scintilla in either direction.

I’ve often wondered if Trump was even worthy of impeachment. And now it seems as if he is degrading this process just as he degrades everything else.

As Carl Hulse wrote in the New York Times, “fears are mounting that presidential impeachment might, like the filibuster, become a regular feature of America’s weaponized politics”.

Trump is pretending that his pressure on Ukraine’s president was about fighting corruption when we all know that he fosters corruption. He sins in the saintliest areas. It was just announced that he had to pay $2 million to eight charities after admitting that he diverted funds from his foundation to his campaign and to cover business debts.

We see a constant parade of Washington pooh-bahs like James Comey, Andrew McCabe and John Brennan on cable, sounding the alarm and presenting themselves as the white hats to Trump’s black hat. Retired generals grimace at the president’s impetuous, ego-driven foreign policy.

The left keens that the president is destroying our sacred institutions and jeopardising our national security. But for many Americans, the events of the last week prove that Trump is right to be cynical about a rigged system and deep-state elites.

The government is supposed to protect us from greedy capitalists, not the other way around

The inspector general’s report about the FBI’s Russia investigation offered a hideous Dorian Gray portrait of the once-vaunted law enforcement agency. As Charlie Savage wrote in the New York Times, the report uncovered “a staggeringly dysfunctional and error-ridden process”. The FBI run by Comey and McCabe was sloppy, deceitful and cherry-picking – relying on nonsense spread by Christopher Steele.

With the stunning and sad Afghanistan Papers, the Washington Post revealed what we knew in our hearts: We have spent 18 years and $1 trillion in Afghanistan with generals lying and hiding evidence that the war was unwinnable, just as the generals did in Vietnam. As one general conceded, they did not understand Afghanistan and didn’t have “the foggiest notion” of what they were doing.

Even as president Barack Obama escalated the war, poured in more billions and promised to crack down on corruption, the Post said, the United States looked away and let its allies – the Afghan president, warlords, drug traffickers and defence contractors – wallow in fraud, corruption and dark money.

Then there’s The Report, streaming on Amazon: the heroic saga of Daniel Jones, played by Adam Driver. Jones is working for Dianne Feinstein on the Senate intelligence committee and spends years compiling a report documenting the CIA’s use of waterboarding and other forms of torture in secret prisons – a barbaric, unAmerican and ineffective system designed by two creepy psychologists who were paid about $81 million by the CIA.

The movie is not kind to Obama and Denis McDonough, suggesting that they protected the CIA and tried to bury grisly details from the report to fend off criticism that Obama was weak on terrorism. It is also a harsh portrayal of Brennan, MSNBC’s Voice of Morality, who, as CIA director, fought the Senate inquiry so hard that his operatives even clandestinely hacked into the computer network of committee staff members to figure out how they were getting their information.

If this weren’t enough institutional perfidy for one week, we had the Boeing hearing in Congress: a Federal Aviation Administration analysis done after the first deadly crash off the coast of Indonesia showed the agency knew that if it did not act, the Boeing 737 Max was likely to crash 15 times in the 45 years it was expected to fly, theoretically killing more than 2,900 people. But that wasn’t enough to immediately ground it. The government is supposed to protect us from greedy capitalists, not the other way around.

Unfortunately, this climate of confusion and cynicism allows Trump to prosper. He did not come to Washington to clean up the tainted system; he came to bathe in it. – NYT Service

Maureen Dowd is a columnist with the New York Times