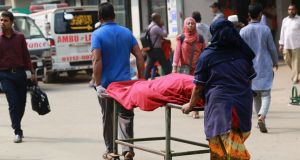 A body is transported at Dhaka Medical College Hospital following a deadly fire at a plastic factory in Dhaka on December 12th. Photograph: Rehman Asad/ AFP via Getty Images

At least 10 people have died in a fire at a factory outside Bangladesh’s capital, the second such blaze in the area in less than a week.

The fire broke out on Sunday evening in the Luxury Fan Factory in the Gazipur area outside Dhaka.

He said several people were injured but provided no exact figures.

It was not immediately clear how many workers were inside the factory when the fire began or what caused the blaze.

Such fires, many of them occurring in unregulated factories, are common in Bangladesh, which is a major manufacturing hub.

On Wednesday, a fire in a plastic factory near Dhaka killed at least 15 people. – PA