UK election: Who could be the next leader of the Labour Party? 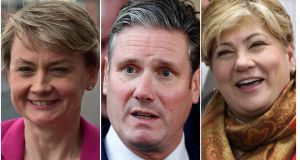 Yvette Cooper ran against Corbyn for the leadership in 2015 and is viewed as a centrist. Therefore, she would be likely to face an up-hill battle to convince the party membership she is the right person for the job.

After losing the leadership election, Cooper focused on becoming a prominent figure on the backbenches, delivering scathing blows to the government in the Commons and has mastered the policy detail on Brexit and home affairs, the latter of which she scrutinises in her role as chair of the home affairs select committee.

She has been an MP since 1997 and held positions including chief secretary to the treasury and secretary of state for work and pensions when Labour was in government.

A close ally of the shadow chancellor John McDonnell Long-Bailey has been groomed as a potential left-wing contender for the top job, who launched a slick video about her backstory during the campaign. The Salford MP and shadow business secretary was a stand-in for Corbyn in leadership debates.

During the election campaign, Long-Bailey spearheaded promotion of the party’s plan for a green jobs revolution and was forced to tackle tough questions over its decision to soften its stance on hitting net-zero carbon emissions.

Her father was a Salford docker and trade union representative, and she worked in several service industry jobs before qualifying as a solicitor. But given her close alliance with Corbyn and the left, and the rejection delivered by the electorate on Thursday, members may be nervous.

The Wigan MP has said she is seriously thinking about running for the leadership. In a piece for the Guardian, Nandy said she believed that, taken individually, many of the policies in Labour’s manifesto were popular with the public and that the election was not won due to any real affection for Boris Johnson and what he stands for.

Nandy has built a reputation as a campaigner for her constituency and others like it, many of which have fallen to the Tories. She helped to create the Centre For Towns thinktank and called for compromise over Brexit.

A soft-left candidate, she resigned from the shadow cabinet in 2016 over Corbyn’s leadership and handling of the EU referendum. Like Phillips, she may be viewed with suspicion by Corbyn supporters.

The MP for Birmingham, Yardley is a strong media performer who has built up a significant public profile from the backbenches. Her fiery speeches and witty barbs aimed at the Conservatives, including the prime minister, frequently go viral online. She is also considered a passionate advocate for her constituency and issues on the ground therein.

Corbyn-supporting Labour members are likely to be deeply suspicious of her, as she has frequently been critical of his leadership and the party’s approach to anti-Semitism.

She has not formally announced her candidacy but wrote a piece for the Observer after the election, which many have viewed as the start of her bid for leadership. The piece discusses the issues of trust with Labour on the doorstep and the challenge of bringing back working-class voters.

The shadow education secretary, a close friend of Long-Bailey’s, said in recent days she would like to support a Labour Brexit deal. She is regarded as a powerful public speaker and was praised for her interventions during the campaign. Some senior Conservatives said they would fear her as an adversary.

On her policy brief, her most controversial moments focused on private schools, which she believes should no longer be subsidised through charitable status.

Rayner’s life is often described as inspirational. She grew up on a council estate in Stockport; had a mother who couldn’t read or write; left school without any qualifications; got pregnant at 16 and left home to bring the child up alone. She qualified as a social care worker and became Unison’s most senior official in the North West region. She describes herself as “soft left” and backed Andy Burnham in the 2015 leadership election.

The ambitious former director of public prosecutions has led the charge for remain in the shadow cabinet. He has held his Holborn and St Pancras seat in London since 2015 and been instrumental in shifting Labour’s position towards backing a second Brexit referendum. The party’s stance on Brexit has been blamed by some for the staggering defeat suffered by Labour on Friday. This means Starmer’s ownership of the direction taken could prove problematic if he tries to convince the membership to appoint him as their leader.

Away from Brexit, his politics are less clear. Prior to taking the role of DPP, he worked as a defence lawyer specialising in human rights issues. The Human Rights Act and the broader aspects of the constitution in the UK are in the sights of the Conservative government so his expertise in this area could be a strong sell.

Starmer is the only male runner on this list. There have long been calls for the next Labour leader to be a woman, including most recently from McDonnell. McDonnell himself, once considered to be a potential candidate, has ruled himself out, as has Richard Burgon, the shadow justice secretary. The Conservatives frequently dig Labour over the fact the party have never had a woman as leader and the Tories have had two female prime ministers.

The shadow foreign secretary had a quiet election campaign, which was viewed in some quarters as a sign she would run for leader if Labour lost the election. Others believed she was being kept quiet due to her remain position. She has been faultlessly loyal to Corbyn, despite not always having been on his left-wing side of the party. She believes she is good at taking on Boris Johnson. In her acceptance speech in London constituency Islington South and Finsbury, she said: “The real fight has to begin now.”

Thornberry will have to fight allegations of being part of the “metropolitan elite”. The image has plagued her ever since she tweeted a picture in 2014 of a house in the Rochester and Strood constituency adorned with three flags of St George and the owner’s white van parked outside, provoking accusations of snobbery. She resigned her shadow cabinet position shortly afterwards.

Thornberry’s formative years may have informed her politics. Her parents divorced when she was seven years old and she moved into a council house with her mother. She and her siblings took free school meals. But her politics remain elusive. She voted against her own government under Blair and Brown but backed Yvette Cooper in the 2015 leadership campaign. As shadow foreign secretary, she has always trodden a careful line that does not stray too far from the leadership on issues such as Russia, Israel and Trident. – Guardian