Britain's Prince Harry and his wife Meghan held a photo call to introduce their son Archie Harrison Mountbatten-Windsor to the world. Video: Reuters 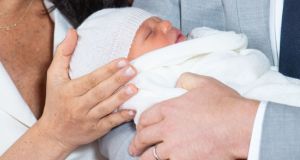 The Duke and Duchess of Sussex with their baby son Archie, who was born on Monday morning, during a photocall at Windsor Castle in Berkshire. Photograph: Dominic Lipinski/PA Wire

The Duke and Duchess of Sussex have named their baby son Archie Harrison Mountbatten-Windsor, the couple announced on their Instagram account.

Prince Harry and Meghan Markle have posed with their baby son for the first time, after what they described as “a special couple of days”.

They posed for pictures with the infant in St George’s Hall in Windsor Castle, just two days after the birth.

“It’s magic, it’s pretty amazing. I have the two best guys in the world so I’m really happy,” the duchess said.

As her husband held their son, she added: “He has the sweetest temperament, he’s really calm.”

As they both laughed, the duke said: “I don’t know who he gets that from.”

The duchess added: “He’s just been the dream so it’s been a special couple of days.”

The latest royal baby made his debut behind closed doors, with a small press pool of only one reporter, one photographer, three cameramen, as well as the couple’s own private photographer and a household press officer photographer.

The American former actress gave birth to the overdue 7lb 3oz boy on Monday at 5.26am.

The baby is seventh in line to the throne and Queen Elizabeth and the Duke of Edinburgh’s eighth great-grandchild and the Prince of Wales’s fourth grandchild. – PA