Announcement sparks concern across Europe, while US introduces new sanctions 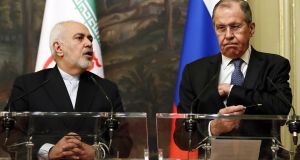 Iran’s landmark nuclear deal was at risk of collapse after Tehran said it would cease to implement some of its commitments under the 2015 accord, its response to the US’s withdrawal and the failure of other signatories to help shore up its economy.

Hassan Rouhani, Iran’s president, said in a televised address on Wednesday that his country would cease to honour key commitments agreed in the deal, but stressed it would do so in line with dispute resolution provisions included in the accord.

The dramatic move marked the latest unravelling of one of the multilateral accords US president Donald Trump has railed against since taking office, coming as Washington ramps up pressure on Tehran one year after abandoning the deal.

Iran’s announcement sparked concern across Europe, where it dealt a blow to France, Germany and the UK – the three European signatories to the deal – which have fought against the odds to keep the deal alive since it was ditched by Mr Trump.

The so-called E3 have tried to mitigate the economic damage caused by US sanctions by keeping finance and trade channels to Iran open. But they have struggled to produce results as western companies pull out of Iran for fear of US retaliation.

Heiko Maas, Germany’s foreign minister, said: “We heard Iran’s announcement with great concern and will now take a closer look at it. We are in contact with the remaining participants in the nuclear agreement on this. Our attitude is and remains that we want to preserve the agreement, in particular to prevent Iran acquiring a nuclear weapon.”

France has reluctantly accepted the possibility of new EU sanctions against Iran. “That is one of the things being looked at,” Florence Parly, French defence minister, told BFM TV on Wednesday. “If these commitments are not met, naturally that would raise the question,” she said.

Germany, the UK and France had stood by Iran, believing the agreement was an example of successful international diplomacy that had prevented Tehran from pursing a nuclear programme.

A senior EU official said: “Leaders and others will meet in the coming days and it will be an issue under discussion. We are in an assessment phase and the rest is pure speculation.”

Mike Pompeo, US secretary of state, abruptly cancelled a visit to Germany on Tuesday and flew to Baghdad, telling reporters that this was in response to reports that Tehran was “escalating their activity”, although he did not provide any detail about potential threats.

The unscheduled trip came days after the US announced that it was deploying an aircraft carrier strike group to the region.

Under the nuclear deal, which took several years to negotiate, Iran agreed to limit its nuclear activities in return for the economic benefits of many sanctions being lifted.

However, in his statement on Wednesday, Mr Rouhani said Iran would over the next two months stop transferring excess heavy water involved in the uranium enrichment process and no longer swap enriched uranium for mined uranium yellow cake.

He said Iran would resume these commitments if the UK, France, Germany, Russia and China could find a mechanism for Iran to sell oil and handle banking transactions within the next two months. If not, Iran would resort to the next step by which the country would not observe the limitation on uranium enrichment at 3.67 per cent. He said all these steps were notified to the five capitals.

Iranian foreign minister Mohammad Javad Zarif flew to Moscow on Wednesday to deliver a letter from Mr Rouhani to president Vladimir Putin. Sergei Lavrov, Russia’s foreign minister, said after meeting Mr Zarif that the crisis around the deal was the result of “the United States’ irresponsible policy”.

Dmitry Peskov, Mr Putin’s spokesman, told reporters that the Kremlin continued to support the deal and would work with European countries to “prolong the document’s lifespan”.

Tehran has continued complying with the accord in the year since the US withdrew from it. But the so-called E3 have struggled to counter the impact of sanctions that have driven Iran into a deep recession and emboldened regime hardliners who say that the country never received the promised dividend.

Germany, France and the UK launched a special purpose vehicle, Instex, in January in a bid to keep financial and trade channels with Iran open, but it was seen as a largely symbolic move. The IMF forecasts that the Iranian economy will contract by 6 per cent this year.

Mr Rouhani said Iran remained committed to diplomacy but “with a new language and logic”. He also insisted that the Islamic republic would not start any war nor leave the negotiating table. “But we will not bow to bullying [from the US],” he said.

Mr Rouhani was a key architect of the nuclear accord and hoped to use the deal to attract much-needed investment to the country and tentatively re-engage with the West. But as the US has ratcheted up pressure on the regime, he has come under increasing pressure from opponents who accuse him of being duped by the West into agreeing unfavourable terms. – Copyright The Financial Times Limited 2019/Reuters