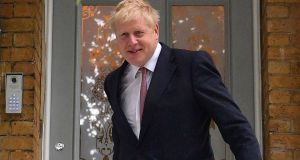 Ahead of the start of the Conservative leadership contest next week, the Peterborough byelection result has exposed in the starkest terms the predicament in which the party finds itself.

In a marginal seat that has passed between Britain’s two biggest parties for decades, the Tories were pushed into third place behind Labour and the Brexit Party.

Labour’s 31 per cent was the lowest vote share for a winning party in a byelection since 1945. But the Brexit Party’s almost 10,000 votes came mostly from the Conservatives, with Labour losing much less support to the Liberal Democrats and the Greens.

A Labour government, with or without the support of smaller parties, would be unable to deliver Brexit without a second referendum

More than a fifth of the 313 Conservative MPs at Westminster have majorities smaller than 5,000 and the Brexit Party represents a mortal threat to each of them. Boris Johnson argued on Friday that Peterborough means the Conservatives must deliver Brexit by October 31st to neutralise the Brexit Party.

But Jeremy Hunt warned that risking an election before Brexit was delivered by threatening to leave the EU without a deal would allow Jeremy Corbyn “to sneak through the middle”.

Peterborough was a setback for the Brexit Party, fresh from its success in last month’s European Parliament elections and full of bluster about its chances in a general election. Peterborough, which voted almost two to one for Brexit, in a byelection triggered by the criminal conviction of the sitting Labour MP, was probably the easiest target the party will ever find.

Labour owed its victory in large part to its superior ground game and to a small army of committed, well-organised volunteers from Momentum, which supports Mr Corbyn’s leadership. Mr Corbyn said on Friday that Labour had not yet reached the point of shifting its Brexit policy towards unequivocal support for a second referendum.

But that change in policy is coming, probably soon after the election of the next Conservative leader. If the Labour leadership doesn’t move first, the membership will make the change at the party conference in September.

Backing a second referendum with a view to remaining in the EU would cost Labour votes in some Leave-voting constituencies. But if the Brexit Party is still around at the next general election, it could take enough votes from the Conservatives to allow Labour to hold such seats on a lower vote share, just as it did in Peterborough.

A Labour government, with or without the support of smaller parties, would be unable to deliver Brexit without a second referendum. So the rise of the Brexit Party would have had the effect of making Britain’s departure from the European Union less likely.