Trump positive about migration deal with Mexico despite tariff plan 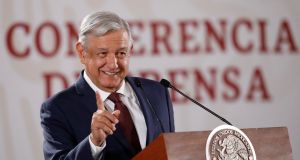 Mexico’s president, Andres Manuel Lopez Obrador: says it is a mistake for the US to link migration with trade. Photograph: Edgard Garrido

US president Donald Trump said on Friday there was a “good chance” the United States would be able to reach a deal with Mexico over migration, although his administration was still pushing ahead with a plan to slap import tariffs on its southern neighbour next week.

Mr Trump has threatened to impose the levies on all Mexican imports, starting at 5 per cent on June 10th, if its government does not agree to do more to tackle an increase in mostly Central American migrants crossing Mexico to enter the United States. Apprehensions at the US-Mexico border hit a decade high in May.

The two sides started a third day of talks in Washington on Friday to reach a deal.

Mexico’s peso, which has been battered by fears of a trade war with its biggest market, strengthened more than 0.5 per cent against the dollar after the tweet.

Marc Short, chief of staff to US vice-president Mike Pence, said earlier on Friday that the United States was moving ahead with a legal notification of the tariffs on Mexican goods. “You should anticipate that happening today,” he said at the White House.

Mr Trump, who has railed against what he describes as a surge of migrants across the US-Mexico border, has warned that the initial tariffs on Mexico will be incrementally increased each month up to 25 per cent if a migration deal fails to materialise.

Mexico is scrambling to avoid such a scenario. “It’s a good sign that talks have not broken down,” Mexican president Andres Manuel Lopez Obrador told reporters in Mexico City. “There is dialogue and an agreement can be reached. I’m optimistic we can achieve that.”

Mr Lopez Obrador, however, said it was a mistake for the United States to link migration with trade.

Mexico has prepared a list of possible retaliatory tariffs targeting US products from agricultural and industrial states regarded as Mr Trump’s electoral base, a tactic China has also used with an eye toward the president’s 2020 re-election bid.

Such a move would leave the United States fighting trade wars with two of its three largest trading partners and further unnerve financial markets already nervous about a global economic slowdown.

The United States slapped up to 25 per cent tariffs on $200 billion in Chinese imports last month, prompting Beijing to levy its own tariffs on a revised target list of $60 billion in American goods.

US officials officially granted Chinese exporters two more weeks to get their products into the United States before the higher tariffs were applied, according to a US government notice posted online on Friday.

Mr Trump said on Thursday he would decide later this month whether to carry out his threat to hit Beijing with tariffs on an additional list of $300 billion in Chinese goods. The looming US tariffs have caused businesses in Mexico to scramble to get their products into the United States.

Economists say the trade disputes could damage key supply lines and pinch consumers at a time when the global economic expansion that followed the 2008 financial crisis has started to sour and the risk of recession has risen. – Reuters