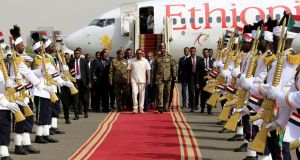 Ethiopian PM Abiy Ahmed, arrives to mediate in the political crisis that has followed after the overthrow of Sudanese president Omar al-Bashir, at the airport in Khartoum, Sudan on Friday. Photograph: Mohamed Nureldin Abdallah/Reuters

After flying in from Addis Ababa, Abiy Ahmed held separate talks with both sides, days after the worst bloodshed since the military ousted Mr Bashir in April to end his three-decade rule.

The opposition, which is demanding civilian government, says 113 people were killed in the storming of a protest camp on Monday and subsequent crackdown. The government put the toll at 61 people, including three security personnel.

“The military and the people and the political forces need to act with bravery and responsibility in taking quick steps to a democratic, reconciliatory transitional period in the country,” he said in a statement.

An adviser to Mr Abiy said the talks went well and that the prime minister would be returning to Sudan soon, but there was no word of a breakthrough or further details.

The military council and opposition had been in talks for weeks over who should lead Sudan’s transition to democracy. But negotiations collapsed after Monday’s violence, with the opposition saying it could not talk to untrustworthy rulers.

Mr Abiy, a reformer who took office last year, has won wide praise for his diplomacy skills, including brokering peace with Ethiopia’s neighbour and long-time foe Eritrea. The opposition said it would accept his mediation if the military council took responsibility for Monday’s violence, an international investigation was launched, and political prisoners were freed.

Stability in Sudan is crucial for a volatile region struggling against Islamist insurgencies from the Horn of Africa to Egypt and Libya. Various powers, including wealthy Gulf Arab states, are trying to influence its path.

Saudi Arabia and the United Arab Emirates, which have close ties with the military council, have said they are watching developments with concern and support a renewal of dialogue.

Sudan was on a US list of sponsors of terrorism under Mr Bashir, an Islamist former general accused of war crimes in the western Darfur region.

A doctors’ group linked to the protest movement said hospitals were now overcrowded with people injured in this week’s crackdown. – Reuters