British prime minister Theresa May has used her annual new year’s video message to urge MPs to allow the UK to ‘turn a corner’ by voting for her Brexit deal. Video: 10 Downing Street 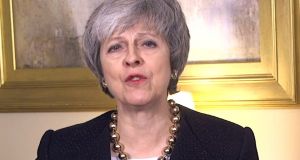 More than half of grassroots Conservative members want British prime minister Theresa May’s Brexit deal to be ditched in favour of no deal, a survey has found.

About 57 per cent of the rank-and-file are convinced that leaving the EU without a deal is better than their own leader’s Brexit plan, according to a poll funded by the UK’s Economic and Social Research Council.

Less than a quarter (23 per cent) would vote for Mrs May’s deal in a three-way referendum between the deal, no deal and remaining in the EU.

The latest findings are bad news for Mrs May’s hopes of winning support for her deal, said research leader Prof Tim Bale. “If Theresa May is hoping that her MPs will return to Westminster having been persuaded by their constituency associations to back her Brexit deal, she’s going to be disappointed,” he said.

“It appears that those members are in no mood for compromise. Moreover, the Tory rank-and-file, it seems, are convinced that no deal is better than May’s deal.”

Prof Bale added: “Tory members’ dislike for the PM’s deal really comes out when we asked about a referendum in which the choice came down to her deal or no deal. Only 29 per cent of Tory members would vote for Mrs May’s deal, compared to 64 per cent who would vote to leave without a deal.

He said there were two specific issues behind the opposition to Mrs May’s deal, the first being the Irish backstop.

“Tory members have become convinced that the Irish backstop is a bad idea,” he said. The survey, he pointed out, found that that 40 per cent of Conservative Party members thought the backstop was a reason in itself to reject a deal, while 21 per cent thought it was irrelevant because Mrs May’s deal “is a bad one anyway”.

The backstop is a mechanism to ensure there is no hard Border in Ireland after Brexit.

The second issue was that 76 per cent of members believed warnings that a no-deal Brexit would cause serious disruption were “exaggerated or invented”.

“Tory members – like Tory voters – are utterly unconvinced, despite their own government’s best recent efforts – that a no-deal Brexit would cause serious disruption,” said Prof Bale. “Some 72 per cent of voters currently intending to support the Conservatives think the warnings are ‘exaggerated or invented’ – a figure that rises to 76 per cent among Tory members.

“Meanwhile, those members are convinced by a margin of 64 per cent to 19 per cent that leaving without a deal would have a positive rather than a negative effect on Britain’s economy in the medium to long term.”

Nearly half (48 per cent) of Tory members think Mrs May is doing fairly badly or very badly as prime minister, and 44 per cent think she should quit if parliament votes to reject her deal.

“In short, Mrs May has failed not only to convince the country, and quite probably parliament, that her Brexit deal is a good one, she has also failed to convince the party faithful,” Prof Bale said. “If anything, grassroots Tories are even less impressed than Tory MPs.

“If some of those MPs can be persuaded to back the prime minister’s deal, it won’t be because they’ve come under pressure to do so from their local party members over the Christmas break.” – PA