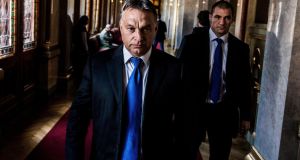 Hungarian opposition groups and trade unions have pledged to hold more street protests and threatened to launch strike action, unless the nationalist government of prime minister Viktor Orban accepts a range of demands.

Thousands of people rallied in Budapest on Saturday and smaller marches took place in other Hungarian towns and cities, as a broad new protest movement launched what it is calling “a year of resistance” against Mr Orban’s rule.

The demonstrations began last month when his government passed what critics call the “slave law”, which allows Hungarian firms to demand 400 hours of annual overtime from workers and gives them three years to make payment.

The changes were deemed exploitative by union leaders, who for the first time came out in protest alongside political and civic organisations that accuse Mr Orban of destroying Hungary’s democracy and rule of law.

Protest leaders want him to abolish the “slave law”, guarantee the independence of Hungary’s beleaguered courts and public media, and allow the country to join the EU prosecutor’s office to allow outside scrutiny of state corruption.

On Saturday, union leaders said they would present the government with their own demands, including an end to the new overtime rules, higher pay, more workers’ rights and a better pension system.

Laszlo Kordas, the president of Hungary’s trade union federation, warned that workers would step up protest action if Mr Orban refused to negotiate.

“The government has abandoned us and sided with the heinous profit-seekers over its own people,” he said, referring to the big manufacturers – including German carmakers in Hungary – that the “slave law” is perceived to favour.

“The country must come to a halt at the same time on the same day . . . On January 19th, we are organising a national demonstration in all counties, in all major cities,” Mr Kordas announced, vowing that workers would block roads and bridges.

That event would serve as a warning for a possible strike to come, union leaders said.

The government shows no sign of backing down, however, and claims without offering evidence that the protests are somehow linked to liberal philanthropist George Soros, who Mr Orban accuses of trying to destroy Europe by funding mass migration.

“These protests are being arranged with George Soros’s money, so that Hungary can also be turned into an immigrant country. This is why anti-immigration governments are being attacked across Europe,” said government spokesman Istvan Hollik.

Mr Orban has amassed huge power since taking office in 2010, by exploiting the collapse of Hungary’s centre-left opposition and stoking fear of foreigners after the 2015 surge in migration via the Balkans.

The EU is suing Hungary over policies that target migrants, NGOs and the Central European University that is funded by Mr Soros, and which is now being forced to move most of its courses from Hungary to Austria.

Mr Orban says he is simply fulfilling the mandate he secured when easily winning re-election last April, and insists that the so-called slave law will benefit workers who want to earn more at a time of low unemployment in Hungary.

“We are against the government not just because of the new law but because of lots of things that it has introduced,” protester Gabor Monori (37) said outside parliament in Budapest on Saturday.

“Until now, we didn’t feel like we had a party that represents our views, but these days the entire opposition got together, and we feel like maybe in 2019 we can change something.”

Valentine (22), a protester who declined to give his surname, said: “I think it depends on the workers and whether they are willing to protest and risk their jobs and stop work for a few days. That [strike] could be more important than these protests.”