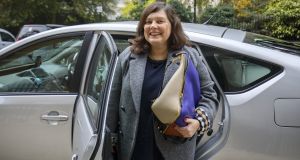 Anne Boden: she claims Starling has a “different mindset” from the big banks

British mobile-only financial institution Starling Bank, which is planning to set up an Irish subsidiary, intends to use the unit here as a hub to target the French and German markets, according to its chief executive Anne Boden.

Writing in a blog on the company’s website posted on Monday, Ms Boden, who previously served as chief operating officer of AIB in Dublin, said: “It’s no secret that Brexit is a major cause of uncertainty for everyone. We’re putting contingency plans in place to ensure that normal services to customers is not interrupted.”

A spokeswoman for Starling Bank said the company has not yet filed an application for a licence with the Central Bank of Ireland.

Ms Boden, an industry veteran who launched Starling in early 2014 after an 18-month stint with AIB here, has set her sights on hitting one million customers in 2019.

The bank, which already has a single euro payments area licence which allows it to carry out direct debit and card payments and transfers across the EU, saw its customers grow from 50,000 to more than 400,000 last year as its headcount expanded from 130 to exceed 300.

Ms Boden used her blog to call on the big UK banks to scrap fees and charges for unarranged overdrafts, declined transactions and international transfers.

She said high street banks were updating their products and features akin to Starling – she stressed that imitation was the sincerest form of flattery – but were still “clinging to outmoded practices”.

Ms Boden maintained that Starling has a “different mindset” from the big banks.

“We don’t charge for declined transactions because the process of declining a transaction is automated, and the incremental costs to us for each such transaction is very small.It’s the same for the big banks, but they still charge. Why? Because until now they have got away with it.

“If the fat cats of banking really want to copy us, let them copy our fees and charges too.”

Starling also does not charge any fees for customers using their debit card abroad and nor does it impose a monthly cap on free overseas card transactions or cash withdrawals.

Starling operates solely from its mobile app, and does not have any bricks and mortar branches, although it does have an agreement with the UK Post Office for customers who want to make or withdraw cash deposits.