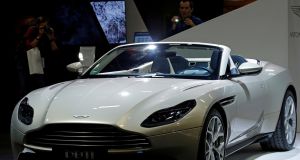 British carmaker Aston Martin has triggered contingency plans to cope with a potentially disorderly Brexit, including hiring a new supply chain chief and preparing to fly in components as well as use ports other than Dover.

Britain, the world’s fifth largest economy, is due to leave the European Union in just over 80 days but a negotiated withdrawal agreement looks set to be voted down by UK lawmakers next week, making a “no deal” exit – and disruption to trade – more likely.

Britain’s car industry, which employs over 850,000 people and is one of the country’s rare manufacturing success stories, has warned that leaving the world’s biggest trading bloc without a deal would add costs and could halt output due to snarl-ups.

Aston Martin chief executive Andy Palmer said the luxury automaker, which outlined its contingency plans in October, had no choice but to authorise them at a board meeting in December.

“I don’t think we’ve been in a position in the last two years where we’ve been further apart from understanding where we’re going to end up,” Mr Palmer said, declining to put a figure on the “accumulating” cost of the plans.

“We programme a car to align and order all the parts for those cars 12 weeks in advance. You don’t need to do the maths to know that therefore takes us across the Brexit period.”

“We have to prepare for the worst case scenario.”

Aston is signing deals with supplier DHL to allow for the use of ports other than Dover – Britain’s busiest and so most likely to be disrupted by any customs delays – and has authorised its supply chain team to make air freight bookings.

The British government has said it will prioritise the movement of key supplies such as medicines if the flow of goods is hit after Brexit, so it is unclear what would happen to other items.

“We don’t have any assurances,” said Mr Palmer. “One assumes if you’re putting parts on to a standard chartered plane, no one’s going to kick you off.”

1 Bank leaked my loan request to family who tried to rip me off
2 Solar panels: How do they work - and are they worth it?
3 Commercial vacancy rates increased in all provinces last year
4 McEvaddy brothers to continue to back Irish aviation firm
5 Kingspan and Greencore executives sell €11m in shares
6 Ryanair and Aer Lingus monitor impact of coronavirus on travel to Italy
7 When the Chemistry no longer works – the closing of a leading Irish ad agency
8 UK lays down red line for Brexit trade talks
9 Can I see my father’s previous wills?
10 New homes in Cork, Coveney and Murtagh sell shares, and solar savings
Real news has value SUBSCRIBE