‘We are human beings’: Migrants stranded at sea grow frustrated 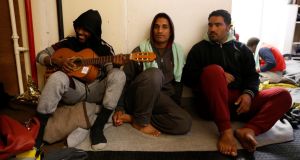 A migrant plays a guitar while resting on the ‘Sea-Watch 3’ off the coast of Malta in the Mediterranean Sea on January 3rd Photograph: Darrin Zammit Lupi/Reuters

After two weeks stranded at sea and battered by winter storms, migrants on board a rescue ship are growing frustrated, supplies are dwindling and the crew are exhausted as European countries refuse to offer a safe port of call.

The Sea-Watch 3, a vessel run by a German humanitarian group, plucked 32 people from an unsafe boat off the coast of Libya on December 22nd, including three small children who are suffering from seasickness and four teenagers, who are travelling alone.

The vessel is now in Maltese waters sheltering from high winds and rough seas. In an act of desperation, one migrant jumped into the frigid waters on Friday, trying to swim for shore, but was quickly pulled back on board by the crew.

“We are here on this boat and we do not understand what is happening,” Bob Kiangala, from the Democratic Republic of the Congo, told Reuters.

“We are not fish, we are not sharks, we are human beings like everyone else. We made this crossing, we risked our lives to get to Europe, and now that we have arrived, Europe refuses, and we do not know why,” he said.

Another German humanitarian group, Sea-Eye, is also in waters off Malta with 17 people rescued on December 29th on board its ship.

This week almost two dozen humanitarian groups, including Amnesty International and the United Nations’ International Organization for Migration, called on the European Union to offer a safe port to both vessels.

Until June last year, Italy took in almost all of the migrants rescued by humanitarian groups, but since then the new populist government’s Interior Minister Matteo Salvini has closed the ports to rescue ships.

The mayor of Naples said on Thursday he was ready to let the ship dock at the town’s port, but ports and immigration are controlled by the central government.

In recent months Spain and Malta have agreed to take in some rescued migrants, but often not before long negotiations with other EU countries. As a consequence, most humanitarian groups have abandoned sea rescue efforts.

Crew members on the Sea-Watch 3 are in good spirits but tired, getting an average of about five hours sleep a night, and the migrants, many of whom endured months of abuse in Libya after making a dangerous desert crossing, are showing signs of stress and mental fatigue, Sea-Watch’s head of mission, Philipp Hahn, said.

Sixteen-year-old Achuil Abdallah, who set off alone from his native South Sudan, said he is relieved to have escaped Libya and now is just hoping to reach dry land: “We all need help.” – Reuters