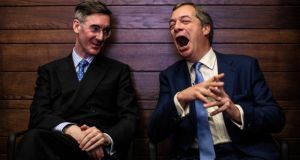 Brexiteers Jacob Rees-Mogg and Nigel Farage, who said if Brexit was obstructed he would “don khaki, pick up a rifle and head for the front lines”. Photograph: Jack Taylor/Getty Images

We need to talk about political violence. In Britain’s current crisis, it is hinted at, alluded to, occasionally threatened. It has a spectral presence, as for example last week, when foreign secretary Jeremy Hunt claimed that “the social consequences . . . of not going ahead and leaving the EU on March 29th, as we’ve been instructed to do, would be devastating”. But it also has a very specific resonance: different ways of thinking about political violence are at the heart of the divide between Britain and Ireland and thus of the failure of the whole Brexit project.

In less than five years, Britain has experienced two attempted revolutions, two upheavals of the kind that, historically speaking, are typically associated with mass violence. One of these is the demand for Scottish independence, culminating in the referendum of 2014. The other is Brexit. Each occupies the emotion-soaked terrain of belonging and identity, that treacherous landscape of minefields and quicksand. And each has been remarkably peaceful. There was no serious violence in Scotland. Brexit has resulted in the murder of an MP, Jo Cox, and has indirectly fed a rise in attacks on “foreigners”. But from any global or historical viewpoint, it looks unusually pacific.

Objectively, by far the biggest danger of violence resulting from this half-cocked revolution is in Ireland

If you’re Irish and you say this to Scots or English people, they look at you in puzzlement. They measure these things by a different scale. Scots were deeply upset that people were abusing each other online during the referendum and that there were some instances of politicians being shouted at in the street. English people are devastated that they can’t talk about Brexit at the Christmas dinner table without risking a row. I do not want to minimise the genuine unpleasantness of this discord, but – how shall we put this? – it’s not Bloody Sunday or Bloody Friday or Enniskillen or Greysteel or La Mon or the Shankill Butchers.

To understand the roots of this difference, just consider what is blithely known in Britain as the Glorious Revolution of 1688. Look it up on Wikipedia and the first sentence reads: “‘The Bloodless Revolution’ redirects here.” This is the last great constitutional revolt within Britain itself and it is remembered as “bloodless”. Which, for England, it mostly was. But in Ireland, the Bloodless Revolution is the Williamite Wars, a murderous international conflict fought on Irish soil, culminating in the Battle of the Boyne and the Battle of Aughrim. Not only was it extremely violent but that violence has been antagonistically encoded in Irish public memory.

Of course, the United Kingdom has in fact experienced a very bloody civil conflict within its own territory much more recently. But the British largely managed to categorise the Troubles in Northern Ireland as a foreign war of the kind they were used to rather than an internal affair. The Irish of all hues were, and still are, Over There. Even appalling atrocities on English soil such as the Birmingham and Guildford bombings never really altered the sense that the Troubles were, and remain, a matter of the bloody Irish killing each other as usual.

We have had no such luck as Britain has enjoyed for centuries, and thus we do not want to push our luck

The British expect revolutions to be bloodless; the Irish don’t. But as with so much else, Brexit plays strange games with these perceptions. Objectively, by far the biggest danger of violence resulting from this half-cocked revolution is in Ireland. Thus, for example, a thousand English and Scottish police officers are currently being given special training to prepare them to be sent to Northern Ireland to keep order in the event of a no-deal Brexit. But in the rhetoric of the Brexiteers, this reality is reversed: the threat of political violence in Ireland is non-existent and anyone alluding to it is scaremongering. But they themselves are free to threaten political violence in England if Brexit is stopped. History is turned on its head: Northern Ireland is apparently so stable that there are no risks but England is a powder keg ready to explode.

At work here is the paradox that the less you know about what internal political violence is really like, the freer you are to wave your rhetorical sword. It is the very belief that revolutions are naturally bloodless that allows Nigel Farage, for example, to boast to a cheering audience in Southampton that if Brexit is obstructed, he would personally “don khaki, pick up a rifle and head for the front lines”. Playing soldiers is a childish game for English nationalists. They can threaten doom because they are actually conditioned by history to be blithely optimistic – in the land of bloodless revolutions, the blood will always be theatrical ketchup.

We in Ireland know different – as, in different ways, do most European countries. We have had no such luck as Britain has enjoyed for centuries, and thus we do not want to push our luck. Even 20 years after the Belfast Agreement, the North is nowhere near being over the trauma of the Troubles. The memory of blood is still in its blood. But the dark irony of this moment in the history of these islands is that we could again see something like the great divide of 1688, a revolution that is bloodless in England but for which Ireland has to pay the violent price.