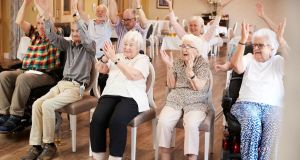 Staying active in retirement and maintaining “hobbies, goals and roles” was also vital to the longevity of the centenarians studied. Photograph: iStock

Ireland’s growing band of centenarians attribute their longevity to the maintenance of friendships, a sense of purpose and an interest in the world around them, according to new research.

An ability to overcome adversity is also an important determinant in ensuring a persons makes it past the 100-year milestone, the study indicates.

Aside from genetic factors, a range of psycho-social factors have “an incredibly potent impact” on the ageing process, according to Alison Fagan, a researcher at the Athlone Institute of Technology.

One is the importance of social connectedness and having close ties to friends, family and the wider community.

“I’m not talking about how we would rank social connectedness today, Facebook ‘friends’ and Instagram ‘likes’. They’re talking about real-time connections, face-to-face interactions with the people around them.”

“Look around any coffee shop and you’ll observe people sitting together in groups completely ignoring each other - every one of them preoccupied by their phones. We need to listen to the centenarians who are telling us to develop our social relationships and put down the phones and actually talk to one another.”

Staying active in retirement and maintaining “hobbies, goals and roles” was also vital to the longevity of the centenarians she studied, she says.

“Often, they carried hobbies, like dancing, right through from childhood to adulthood. They didn’t think of themselves as old.”

One of her interviewees, a sprightly 106-year-old man with a penchant for gardening, was on his drive-on mower when she visited.

“I, assuming he was the son, introduced myself and asked to speak to his father. He laughed, hopped off the lawn mower to shake my hand.” She later discovered that same man still had an active driving licence and drove to mass every Sunday to meet his friends.

Many of those she talked to were engaged with what was happening in the world around them, both on a micro and a macro level.

“Every one of them had an opinion on the big stories dominating the news cycle at the time, notably #MeToo and #Repealthe8th, and was determined to take an active role in the public discourse.”

A capacity for resilience helped many of her interviewees through challenging times, she found. It wasn’t about being orphaned, or separated, or raising children on their own, or never having married; it was about how they dealt with these events, she found.

When one of the women’s husbands got sick, she took on the role of a full-time carer to nurse him back to health.

“What’s incredible is that he is two years older than her and she was 96 at the time,” she explained. “That kind of resilience and positive outlook on life is inspiring, it’s something we should all take on board.”

In contrast, many “older” people in their 60s wrongly consider themselves a burden to society, she says.

“As a trained nurse working in aged care, I often see patients on the other end of the spectrum - older people who have retreated into themselves because they feel that no one wants to listen to what they have to say, even though they have many years of experience that society could benefit from.”

Once an exclusive club, the number of Irish people who have passed the 100-year mark stood at 456 last year. Centenarians rank as the fastest growing demographic globally, in Ireland their numbers are projected to increase 10-fold by 2050.

Ms Fagan, who interviewed a representative sample of 17 centenarians aged up to 106, says more research is needed to give policymakers the tools to plan for the future and put the necessary housing, health and other supports in place, and to deal with pension and working-age issues.

“These are the conversations that we need to be having now,” she says. “This problem isn’t just going to go away, it’s only going to be compounded as the centenarian population grows.”

2:47 Doing the coronavirus rounds with Joe the postman in Dublin 3