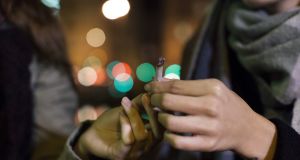 Taking any version of the drug daily was found to triple the chances of developing psychosis.

Scientists carried out the study at 11 sites in five countries across Europe, as well as one in Brazil.

They found that the link with psychosis was strongest in London and Amsterdam, where high-potency cannabis is commonly available.

Psychotic conditions such as schizophrenia can have devastating effects, including paranoid delusions and hallucinations.

Researchers looked at the drug use history of 901 patients experiencing a first psychotic episode between 2010 and 2015, and 1,237 healthy individuals.

The study took place in England, France, the Netherlands, Italy, Spain and BraziI.

Just over a fifth of the psychosis cases were thought to be linked to daily cannabis use across the 11 sites.

Lead researcher Dr Marta Di Forti, from King’s College London, said: “Our findings are consistent with previous studies showing that the use of cannabis with a high concentration of THC has more harmful effects on mental health than the use of weaker forms.

“They also indicate for the first time how cannabis use affects the incidence of psychotic disorder at a population level.

“As the legal status of cannabis changes in many countries and states, and as we consider the medicinal properties of some types of cannabis, it is of vital public health importance that we also consider the potential adverse effects that are associated with daily cannabis use, especially high potency varieties.”

Use of high-potency cannabis was a strong predictor of psychotic illness in London and Amsterdam, where powerful versions of the drug were widely available, said the authors.

Strong marijuana is commonly known as “skunk weed”. In London, skunk-like cannabis with a THC content of 14 per cent now makes up 94 per cent of the drug sold on the street, according to the study.

In France and Spain, herbal forms of cannabis with a THC content of less than 10 per cent were still commonly used.

Removing “skunk weed” from the market would drop London’s psychosis incidence rate from 45.7 to 31.9 cases per 100,000 people per year, the scientists estimated.

Such a move would have an even bigger impact in Amsterdam, reducing the frequency of cases from 37.9 to 18.8 per 100,000 people per year.

The findings are published in the journal The Lancet Psychiatry.

Commenting in the journal, Dr Suzanne Gage from the University of Liverpool wrote: “Given the changing legal status of cannabis across the world, and the associated potential for an increase in use, the next priority is to identify which individuals are at risk from daily potent cannabis use, and to develop educational strategies and interventions to mitigate this.”–AP