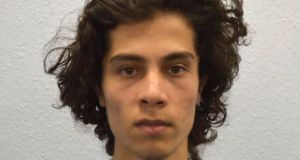 Ahmed Hassan, who has been jailed at the Old Bailey in London for life with a minimum term of 34 years for planting the Parsons Green tube bomb which injured 51 passengers. Photograph: Metropolitan Police/PA Wire

A teenage Iraqi asylum seeker who planted a homemade bomb on a rush-hour London underground train has been jailed for life with a recommendation that he serve a minimum of 34 years.

Ahmed Hassan, who claims to be 18, was convicted of attempted murder after the device partially detonated at Parsons Green, west London, in September last year.

“Your intention that morning was to kill as many members of the British public as possible,” Mr Justice Haddon-Cave told Hassan. “I am satisfied that you were determined to cause as much death and carnage as possible.”

Hassan had carried out the attack with “ruthless determination and almost military efficiency”, said the judge. “There is no doubt in my mind that you are a very dangerous and devious individual.”

More than 50 people were injured when a fireball swept through the carriage, burning passengers’ skin, hair and clothing, or suffered crush injuries as passengers fell over each other while trying to escape. Survivors spoke of feeling their faces being simultaneously burned and cut by flying glass.

On Friday, before Hassan was sentenced, the Old Bailey heard that survivors had sustained severe psychological trauma, and a number still avoided crowds and public transport, had difficulty sleeping and concentrating, and had a fear of fire and flames.

In a victim impact statement read to the court, Stephen Nash described how he did not stop shaking for a week and had since been forced to give up his social work job because he felt unable to board an underground train to come into the city.

Another, Lucinda Glazebrook, said she suffered from post-traumatic stress. “I believe I am a changed person. I thought I was going to die.” Aimee Colville said: “This incident has impacted on me emotionally, I always think every day is the last day.”

Alison Morgan, prosecuting, told the court that Hassan intended to commit mass murder on a crowded Tube train. He was living with foster parents in Sunbury-on-Thames, Surrey, and admitted making the bomb by creating triacetone triperoxide (TATP), a powerful but unstable explosive.

He made an initiator from a halogen bulb, match heads and a timer. Around the device he had packed 2.2kg of shrapnel, including five kitchen knives, two screwdrivers, nails and screws.

Hassan had denied attempted murder and causing an explosion, telling the London court that he had made the bomb because he was “very bored, very depressed, very confused” and wanted to draw attention to himself.

The jury heard that both Hassan’s parents were dead by the time he was six, and he told one of his college lecturers that he believed he had “a duty to hate Britain”, which he blamed for the death of his father in an air raid on Baghdad. He had also complained about the ongoing air strikes against Iraq, sending a text message to the same lecturer in which he said: “Your country continues to bomb my people daily.”

The court heard that Hassan had told home office immigration officials he was abducted by Islamic State in Iraq, and had spent three months “being trained how to kill”. He had then made his way to Britain via Istanbul, Paris and Calais, entering the country in October 2015 as a 16-year-old stowaway in the back of a lorry.

Hassan told the court, however, that he had had no contact with Islamic State, and had fabricated this account in an attempt to win sympathy and secure leave to remain in the UK. The judge said he believed both that Hassan had been associated with Isis, and that he was older than 18.

After his trial, it emerged that he had been a subject of the Prevent counter-radicalisation programme, and appeared to be making good progress after receiving educational and mental health support. Police say they believe him to be a “cunning and devious” individual who intended to kill a large number of people. – Guardian