John Bolton to replace HR McMaster as US security adviser 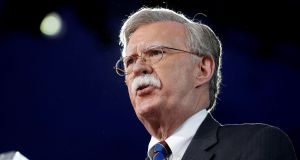 US president Donald Trump’s national security adviser HR McMaster is to leave his administration in the latest high profile departure from the White House.

The US president confirmed on Twitter that former UN ambassador John Bolton will replace General HR McMaster in the key role.

“I am pleased to announce that, effective 4/9/18,@AmbJohnBolton will be my new National Security Advisor,” Mr Trump announced on Twitter. “I am very thankful for the service of General HR McMaster who has done an outstanding job & will always remain my friend. There will be an official contact handover on 4/9.”

Mr Bolton, a well-known conservative and contributor to Fox News, was appointed as ambassador to the United Nations by George W Bush.

I am pleased to announce that, effective 4/9/18, @AmbJohnBolton will be my new National Security Advisor. I am very thankful for the service of General H.R. McMaster who has done an outstanding job & will always remain my friend. There will be an official contact handover on 4/9.

My official statement on accepting @POTUS' request to become the next National Security Advisor. pic.twitter.com/lptI5AwSeU

He is well-known as a strong supporter of the Iraq war, a war that Mr Trump has said the US should never have entered.

The 69-year-old has served in several Republican administrations, and is known to have a hardline stance on several issues such as Iran and North Korea. He assumes the role at a critical moment in US foreign policy, as Mr Trump prepares to hold a face-to-face meeting with North Korean leader Kim Jong-un as early as May. He also holds a hawkish position on Iran, as Washington mulls over whether to pull out of the Iran nuclear deal.

Unlike other senior roles, the position of national security adviser does not need senate confirmation.

The announcement came as departing Secretary of State Rex Tillerson gave his final public comments to staff at the state department.

Mr Tillerson, who was unceremoniously sacked by Mr Trump last week on Twitter, told staff to applause that Washington was a “mean-spirited town”.

Mr Bolton will be the president’s third national security adviser. General McMaster replaced Mike Flynn who stepped down less than three weeks into the job over revelations about contact with the Russian ambassador.