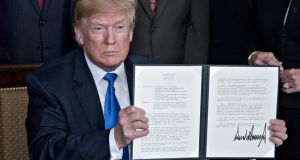 Fears of a global trade war have intensified as US president Donald Trump announced new tariffs on Chinese imports on Thursday, doubling-down on the protectionist politics that underpinned his presidential campaign.

A day before steep tariffs on steel and aluminium imports were scheduled to come into effect, Mr Trump announced new taxes on up to $60 billion (€49 billion) worth of Chinese goods. He also unveiled plans to curb Chinese investment into the US.

While the previously announced steel and aluminium tariffs unveiled earlier this month targeted all exporters into the US, the latest round of tariffs is aimed at China.

US officials have identified 10 key areas that will be targeted, including aerospace, robotics and the biopharma industries. The US treasury department has been tasked with coming up with a specific list within the next 15 days.

Stock markets moved sharply lower on the announcement, which has prompted fears of a looming trade battle between the world’s two largest economies.

Signing the order on Thursday, Mr Trump said the tariffs would “make us a much stronger, richer nation”.

Describing America’s trade deficit with China as “the largest deficit of any country in the history of our world”, Mr Trump said the new measures were about fairness for the American worker.

But there was good news for European exporters, after the Trump administration confirmed that EU steel and aluminium will be exempted from new US tariffs announced recently. The development comes on the back of this week’s visit by EU trade commissioner Celia Malmstrom to Washington.

Beijing is expected to respond aggressively to the latest trade measures adopted by the Trump administration, unveiling its own tariffs on US imports. Among the US exports to China that could be affected are agricultural products including soybeans, a move that would hit American farmers.

The announcement of fresh tariffs comes on foot of an inquiry launched by Trump last August into alleged unfair trading practices by China.

The investigation found that China was exploiting laws governing joint venture requirements and licensing rules to pressurise US companies to transfer technology to Chinese companies, the White House said. “China’s unfair acts, policies, and practices cause tens of billions in damages to the United States each year,” an official said.

The trade move could jeopardise co-operation between Washington and Beijing on other matters, particularly foreign policy.

Trump is due to meet North Korean leader Kim Jong-un in the coming months. While Trump did not contact the Chinese leader Xi Jinping ahead of his announcement of a possible meeting, he is likely to enlist Beijing’s help as he embarks on the biggest diplomatic challenges of his presidency.

Meanwhile, one of the president’s longest-serving lawyers, John Dowd, resigned on Thursday amid reported differences between the two men on the team’s legal approach to the ongoing Mueller investigation.