London Letter: ‘It’s disgusting and it has to be stamped out. Standing ovations are un-English’ 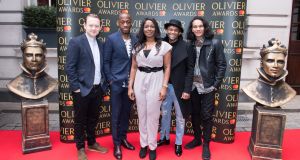 Sitting in the waiting room of a magistrates court among a group of anxious defendants a few weeks ago, I was surprised to find on a plastic bench an old copy of The Lady. Scanning the faces around the room, it was hard to find anyone who looked a likely reader.

Not the grey-haired Glaswegian with five stars crudely tattooed in a diagonal column along his neck, who was eager to get in and out quickly. “I don’t want to waste a day hanging around here,” he said with the look of a man who had wasted many days within the justice system.

Nor was it the young man with a cast on his hand, laughing with friends on FaceTime until his case was called, when his face became a picture of contrition and anguish worthy of El Greco. Resolved to follow his example if I find myself on the wrong side of the justice system some day, I put his troubles out of my mind and opened The Lady from the back.

Founded by the Mitford sisters’ grandfather in 1885, the magazine has been in the same family ever since, surviving two world wars and every social upheaval as the best place to advertise for domestic staff. After briefly considering the offer of a post as the “kindly, good-humoured companion (and kindred spirit)” to “a mature(ish!) lady in Chelsea”, I turned to the etiquette column.

It addressed one of the most divisive issues in London today: the rise of the standing ovation, which was once as rare as a comet. As The Lady’s manners maven notes, Maria Callas won sustained applause at her farewell concert at the Royal Festival Hall in 1973, but no standing ovation.

Writing in The Stage a few weeks ago, Mark Shenton recalled that when Dustin Hoffman made his West End debut in The Merchant of Venice in 1989, he was warned that London audiences were unlikely to give standing ovations.

“Then one night he announced the death of Laurence Olivier to the audience, whereupon they rose to their feet,” Shenton writes. “He is reported to have commented afterwards: ‘You have to f***ing die to get a standing ovation here’.”

As the late Frankie Byrne used to say, it may not be your problem today but it could be some day. And so it happened that a few days after reading The Lady, I was at a preview in the Young Vic of The Inheritance, a new play by Matthew Lopez with a brilliant cast directed by Stephen Daldry. At the end, half the audience, including the two people on my right, rose to applaud and I followed suit.

The friend I came with remained seated, clapping along but looking smug and, I thought, ridiculous as he withheld his full approval. When we argued about it later, I told him that if half the audience was standing, it was churlish to stay in your seat, adding that nobody cared about his approval anyway.

A couple of days later, when I told a friend who spends half of his evenings in concert halls and opera houses, he rounded on me. “It’s disgusting and it has to be stamped out. Standing ovations are un-English,” he said.

I said nothing, silently dismissing his outburst as evidence of the bitterness that sometimes comes to the highly cultured as the penny of middle age begins to drop. But at Hamilton the following Monday, I started to have my doubts.

The musical opened in London last December after more than a decade on Broadway and tickets are so rare and expensive that they make you show a picture ID and your credit card before entering the theatre. Its success in London is a mystery, not least because Alexander Hamilton won his place in American history by founding the federal financial system. It’s safe to predict we will have to wait some time for the orchestra to strike up the overture to Draghi – the Musical.

The show owed much of its impact in the US to the casting of non-white actors in the roles of the founding fathers, an impact lost in London with its very different history of race relations. Still, it receives a standing ovation every night from an audience that has gone to so much trouble and expense to see it that they are determined to enjoy it.

Standing among the applauding crowd as selfies flashed around the auditorium, it felt as if the applause was less about honouring the cast than about capturing a moment for ourselves. Writing in the Telegraph a few years ago, Michael Henderson spotted the same phenomenon.

“This canker in our theatregoing is also rooted in a narcissism that has spread through all parts of life,” he wrote. “In the theatre it takes the form of people arriving late and leaving early, talking throughout the show, leaving their phones on, and even eating.”