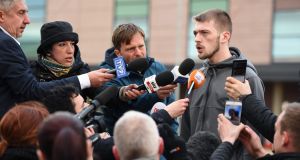 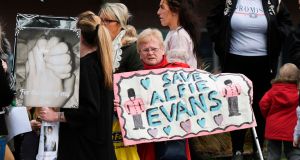 Supporters of the parents of Alfie Evans, who want to take him abroad for treatment, outside Alder Hey children’s hospital in Liverpool on April 16th. Photograph: Paul Ellis/AFP/Getty Images

The father of a 23-month-old at the centre of a life-support treatment battle in England has told reporters gathered outside the hospital that he will meet doctors on Thursday to discuss taking his son home.

A court rejected a last-ditch appeal by Alfie Evans’s parents on Wednesday against an earlier ruling preventing them from flying him to Rome for further care. The Italian government had agreed to grant the boy citizenship, with a hospital in the Vatican offering treatment.

The child, who is suffering from an undiagnosed degenerative brain disease, has been at the centre of a protracted legal fight in which UK doctors have argued that his condition will not improve, that he is suffering and should be allowed to die.

“We got rejected yesterday to go to Italy unfortunately,” said Tom Evans on Thursday morning. “We could take it further but would that be the right thing to do, would there be more criticism? So what we do today is we have a meeting with the doctors at Alder Hey [children’s hospital in Liverpool] and we now start asking to go home.”

“Alfie doesn’t need intensive care any more. Alfie is lying on the bed with one litre of oxygen going into his lungs and the rest is him. Some people say it’s a miracle. It’s not a miracle; it’s a misdiagnosis.”

A ventilator was withdrawn from the child on Tuesday and supporters of the parents hailed it a miracle that he had been able to breathe for so long unaided. But, speaking at Wednesday’s hearing, a barrister for Alder Hey said the parents had not engaged in any discussion about withdrawal of care and that doctors had never said the child’s death would be instantaneous after his ventilator was removed.

An Alder Hey clinician told a previous court hearing that it was currently impossible to move Alfie home for palliative care treatment because of the breakdown in the relationship between doctors and the family, and the hostility of some of the boy’s supporters.

On Wednesday, three court of appeal judges backed the decision made at the high court the previous day . The high court had ruled that Alfie might be allowed home but could not be flown to a hospital in Vatican City.

Mr Justice Hayden said that although Alfie had been a “fighter” since his life support had been removed, his undiagnosed degenerative condition had “almost entirely wiped out” his brain matter and he stood no chance of recovery.

The Italian hospital has acknowledged it will not be able to find a cure, but has proposed maintaining Alfie’s life for about two weeks while doctors try to investigate his condition.

Police on Wednesday issued a warning to supporters of the parents – many of whom have protested outside Alder Hey hospital – that the “unprecedented personal abuse” experienced by medical staff would not be tolerated.

Chief Insp Chris Gibson said social media posts were being monitored and “any offences, including malicious communications and threatening behaviour, will be investigated and, where necessary, will be acted upon”. – Guardian